John Krasinski debuted his video series, SGN (Some Good News), on YouTube last night. SGN is an at-home news show, complete with a delightful logo made by his daughters.

Its goal is to showcase positive stories coming out of our current coronavirus state of affairs — global appreciation for healthcare workers, neighbors helping neighbors, and love conquering all.

At 5:40, there’s a special treat for Office fans — an appearance by Steve Carell!

END_OF_DOCUMENT_TOKEN_TO_BE_REPLACED

In a recent interview with Digital Spy, John Krasinski states he’d be up for a reunion of The Office. END_OF_DOCUMENT_TOKEN_TO_BE_REPLACED

Would you pick up a prescription from sorta Greg? Uh, not recommended. What would you do if he handed over your “drugs… sorry, pharmaceuticals”? END_OF_DOCUMENT_TOKEN_TO_BE_REPLACED 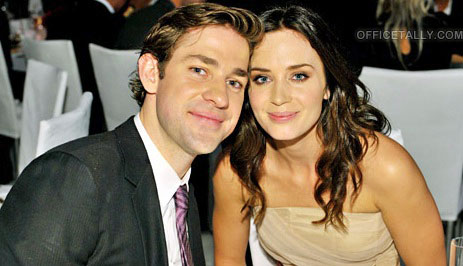 Congratulations to John Krasinski and Emily Blunt, who are expecting their first child!

NBC SALUTES COMEDY TREASURES WITH ‘TV’S FUNNIEST OF THE FUNNIEST: A PALEY CENTER FOR MEDIA SPECIAL’ TO AIR SEPT. 1

The top laugh-out loud scenes from the greatest television shows of all time are celebrated in “TV’s Funniest of the Funniest: A Paley Center for Media Special,” airing Sunday, Sept. 1 (9-11 p.m. ET) on NBC.

With 60 years of hilarious television show moments to choose from, the special focuses on the top 30 funniest moments — ranked in a countdown format and leading to No. 1 — in television history.

Unforgettable scenes are humorously captured from TV’s most popular comedies, including “Seinfeld,” “The Big Bang Theory,” “The Simpsons,” “Friends,” “Will & Grace,” “Everybody Loves Raymond,” “Cheers,” ”Saturday Night Live,” “30 Rock,” “The Cosby Show” and “Modern Family,” as well as unforgettable classics such as “The Mary Tyler Moore Show,” “The Dick Van Dyke Show,” “I Love Lucy,” “The Carol Burnett Show” and “All in the Family.”

The lively laughfest will also include clips from “The Fresh Prince of Bel-Air,” “Taxi,” “Malcolm in the Middle,” “Married with Children,” “Spin City,” “The Office,” “In Living Color,” “How I Met Your Mother,” “Roseanne” and “Curb Your Enthusiasm.”

Beloved stars featured in the clips will be interviewed, sharing revealing behind-the-scenes commentary about what led to each classic moment. It’s an engaging all-star salute to TV’s funniest scenes that television fans won’t want to miss.

John Krasinski talks to Sam Jones about his audition for The Office.