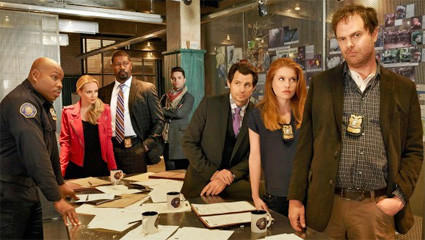 This is what I kept saying to myself over and over again as I watched the first three episodes of Rainn Wilson’s new show, Backstrom, which premieres on FOX Thursday, January 22.

And yet, because I miss the Dunder Mifflin gang so deeply, I couldn’t help but make comparisons.

Both shows have wisecracking ensemble casts. Both shows star Rainn as an scowling and insulting main character.

And both shows are quotable. My favorite line so far: “You have manly sausage fingers.” (Which line does that remind you of, Office fans?)

Official summary:
From the creator of BONES, comedic crime procedural BACKSTROM centers on an unhealthy, offensive, irascible — albeit brilliant — detective (Rainn Wilson) who is brought back from exile to run the Portland Police Bureau’s Special Crimes Unit (S.C.U.).

Meet the cast of characters: