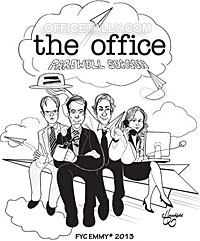 “Matthew Hirschfeld has created several original lithographs for Variety and NBCUniversal as a marketing tool for the 2013 Emmy campaign. The lithographs are an homage to the late New York Times caricaturist, and distant relative, Al Hirschfeld, whose legacy as an American caricaturist of Broadway stars and other celebrities is world renown.”