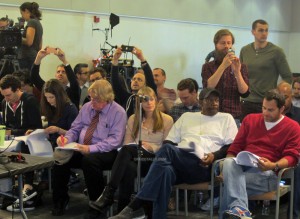 Because Sarah’s there, I’m hoping the table read appears on The Office Season 9 DVD!