Everything you need to know about The Office Jazz Babies Poster, one of the most distinctive decorations of The Office set! 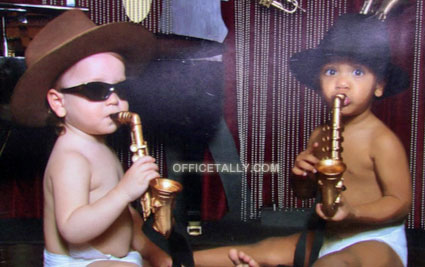 The poster made its first appearance during The Office Season 2 episode, Christmas Party. During the office gift exchange, Toby picks Angela as his recipient.

Toby: I got Angela. She’s into these posters of babies dressed as adults. I got her one of those. I felt kind of weird buying that.

When Michael later turns the gift exchange into Yankee Swap, Kelly receives the poster before it ends back in Angela’s hands.

Kelly (unwrapping the poster): Yikes.
Toby: Well, it’s for Angela, so…
Kelly: That’s like the creepiest thing that I’ve ever seen.
Dwight: Angela, you’re up.
Angela: I’ll take the poster. Some people like these.

In the DVD commentary for Christmas Party, Kate Flannery notes “I love that people actually brought their babies in for this picture” and Jenna Fischer adds “Our prop guys had to create that!”

The poster later become a source of contention between Angela and Oscar in the Season 2 episode, Conflict Resolution.