Summary: After Dwight takes his best shot at Michael, the fight takes a more competitive turn at Dwight’s dojo. Pam gets peeved at Jim when their roughhousing attracts attention from their officemates.

The Office The Fight extras 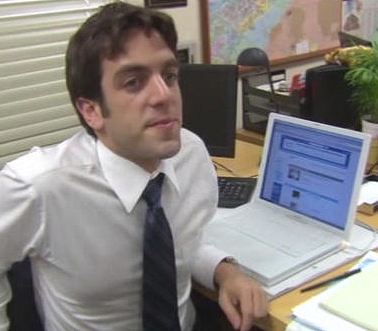 MySpace makes an appearance during this episode — proof that those set computers are actually online! This photo is of the opening scene, where Dwight is looking for his desk.

Did you youngsters catch Jim’s multiple references to West Side Story? When you’re a Jet, you’re a Jet all the way, right?

The Office The Fight quotes

Dwight: Where is my desk?
Jim: That is weird …
Dwight: This is not funny. This is totally unprofessional.
Jim: Okay, well, you’re the one who lost the desk.
Dwight: I didn’t lose my desk.
Jim: Okay, calm down. Where was the last place you saw it?

Dwight: I am a practitioner of Goju Ryu Karate, here in Scranton. My sensei, Ira, recently promoted me to purple belt, and gave me the duties of a senpei. Not that a lot of people here in America know what a senpei is, but it’s equally as respected as a sensei.

Ryan: Hello.
Michael: Hey Ryan. This is Michael Jackson, calling from Wonderland.
Ryan: You mean Neverland?
Michael: This is Tito. (Laughs hysterically.)
Ryan: What?
Michael: Calling from … (Ryan hangs up.)

Pam (reading Jim’s palm): Your major and minor lines cross at a ridge. That sucks.
Jim: You’re making this up as you go along, aren’t you?
Pam: I am just following the website.
Jim: Well, at least I don’t have cavities.
Pam: Yes, you have very nice teeth.
Jim: Thanks.

Jim: Hey Dwight. As senpei, do you ever think that there’s going to be a day where humans and robots can peacefully coexist?
Dwight: Impossible. And the way they’re programmed … you’re mocking me.
Jim: No, I’m not.
Dwight: Well, let me offer you a little piece of advice. I am not afraid to make an example out of you.
Jim: Oh, that’s not advice. What advice sounds like is this: um, don’t ever bring your purple belt to work, because someone might steal it.
Dwight: Okay, give that back to me.
Jim: Okay, say please.
Dwight: No. That is not a toy.
Jim: Please.
Dwight: Please.
Jim: Good. And it absolutely is a toy. (Hands belt to Dwight.) Arigato.
Dwight: Arigato. This is not a toy. This is a message, for the entire office. So that everybody can see that I am capable of physically dominating them.

Michael: And this, is, more of a ying-yang thing, the “Michael” is all cursive, “Scott” all caps, left brain, right brain, or duality of man …
Pam: Could you practice on the forms?

Michael: Just hit me. You’ll see.
Jim: I can’t. Cause uh, just got a manicure, so …
Michael: Oh, queer! Eye, Queer Eye. That’s a good show, important show. Go ahead. Do it!
Jim: Just have Dwight punch you.
Michael (laughing): Oh yeah, well that would be kind of worthless, because I know a ton of 14 year old girls who could kick his ass.
Jim: You know a ton of 14 year old girls?
Dwight: What belt are they?
Michael: Look, Dwight is a wuss. When we rented Armageddon …
Dwight: No …
Michael: … he cried at the end of it. He did.
Dwight: Michael … I told you, that was because it was New Year’s Eve, and it started to snow at exactly midnight.
Michael (mock crying): Bruce Willis, they’re going to leave him on the asteroid!

Dwight: I come from a long line of fighters. My maternal grandfather was the toughest guy I ever knew. World War II veteran. Killed 20 men, then spent the rest of the war in an Allied prison camp. My father, battled blood pressure and obesity all his life. Different kind of fight.

Dwight: Now watch, let me take you from behind.
Kelly: What?!

Michael: The offer, Dwight, was for one punch, which I absorbed. I had no idea there’d be a second punch, so … catch-22.

Michael (looking at framed calligraphy on wall at dojo): I recognize that. That is Japanese for “California roll.”
Ira: Uh, no it’s not.
Michael: I think it is. A guy told me about that.
Ira: Actually, it’s a symbol for eternal discipline.

Jim: Bring it, Beesly, bring it.

Michael: On the street, we didn’t have any rules. Maybe one. No kicks to the groin. Home for dinner.

Michael: You know what? Um, do yourself a favor, just leave me as his contact. And I will call the hospital. Cut out the middle man.

Michael: So … whatcha up to this weekend?
Ryan: Uh, hanging out with some friends, probably …
Michael: Well if you do anything crazy, give me a shout …
Ryan: Yeah, alright, I will, um, see you on Monday.

Michael: I told Dwight that there is honor in losing. Which as we all know is completely ridiculous. But, there is, however, honor in making a loser feel better, which is what I just did for Dwight. Would I rather be feared or loved? Um, easy, both. I want people to be afraid of how much they love me.