The Office’s Brian Baumgartner produces and stars in an NBC special called “Golf Therapy: Life Lessons in the Pursuit of Par.”

The show airs Sunday, August 1, 3pm ET/noon PT on NBC, preceding the final round of the U.S. Senior Open Championship.

Summary: Tim (Rudd) is a rising executive who “succeeds” in finding the perfect guest, IRS employee Barry (Carell) for his boss’ monthly event, a so-called “dinner for idiots,” which offers certain advantages to the exec who shows up with the biggest buffoon.

A Funny or Die exclusive: Zach Galifianakis sits down with The Office’s Steve Carell. Insults ensue. (Warning: NSFW for profanity)

This post lists items related to Steve Carell’s departure from ‘The Office’ — his current contract expires at the end of Season 7.

In the network’s first acknowledgment of Carell’s plans, NBC Primetime Entertainment President Angela Bromstad said Monday the actor’s seven-year run as erratic Dunder Mifflin boss Michael Scott will end when his contract expires in 2011. But Bromstad said the show will go on.

“We’ve been lucky to have had him as long as we’ve had. These things happen when you have such a major movie star in a show,” she said.

“Not to diminish the departure of Steve, because that will impact the show, but we have tremendous faith in the writers and actors to keep it alive,” Bromstad said.

The door is open if he wants to make return visits to the show, Bromstad said.

Whether Michael Scott’s job will be filled by a promotion from within or an outside hire is under discussion. Bringing in a big-name star is an option, but “it’s not the front-running idea,” said Paul Lieberstein, a cast member and executive producer.

“Right now, we’re still talking about a lot of scenarios. We’re trying to get a sense of what the office is like without Steve. We want to be real: What would this office really do (if Michael Scott left)? We want to pursue this as honestly as Dunder Mifflin would,” he said.

“But what we’ll get creatively is actually very exciting. We don’t have to do auto reset at the end of the season, but we get to move on,” he said. 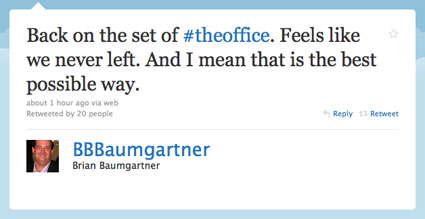 According to the official film website, “Super is a hyper-real and shockingly funny look at the extremely violent antics of a down-on-his luck man’s (Rainn Wilson) attempt to win his wife (Liv Tyler) back from a glamourous drug dealer (Kevin Bacon) by teaming up with a psychopathic teen (Ellen Page) and becoming costumed crime fighters.”

Rainn describes how he became involved with the movie (from Geeks of Doom):

Wilson shares a story about being on the set of The Office, where he plays Dwight and works with Jenna Fischer (Gunn’s ex-wife). Fischer was on the phone with Gunn while Wilson happened to be standing nearby, and when Gunn asked her what he should make next, she told him it should be Super because it’s “the best script you’ve ever written.” Not knowing any actors fitting the lead role, he asked her who could play it and of course she said “What about Rainn Wilson?” At this time Wilson apparently went back to his little cubicle where there was already an e-mail from Gunn with the script, which he got 27-pages into before calling the director and saying “I’m in. We have to make this movie. I have to play this character.”

Another report of the event at Collider.com.

During the Q&A session, a fan asked who would win in a fight between Dwight Schrute and Fillion’s Captain Malcolm Reynolds from Firefly. Here’s what ensued: