[This is one report from my 2013 visit to The Office set. See all reports here.]

Since The Office cast was still shooting the finale when the party started at 8pm, they didn’t arrive to the party until around 10:30 or 11, I think. I believe every guest star that has ever appeared in an episode was invited, but because there were so many people there, I didn’t get to see them all.

The Office Executive Producer Greg Daniels gave a really touching speech, which was followed by a video reel, including new bloopers.

It was wonderful connecting with cast, crew, and writers. Thanks for inviting me! :) 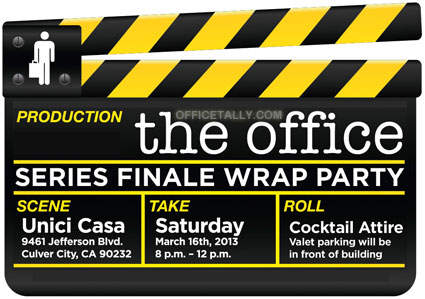 The Office Wrap Party invitation. The party was eventually extended to 1am.