Now that supersizedoffice.com is fast approaching has surpassed 1,000 signatures, I thought it would be fun to list some of my favorite comments.

Yes, I’ve read every single comment, so you don’t have to. You’re welcome. END_OF_DOCUMENT_TOKEN_TO_BE_REPLACED

Thanks to both these ladies, and of course, the almighty Office fan base, we just might get the powers-that-be to give us what we want!

After a three-week drought, The Office is coming back gangbusters this Thursday!

In Maureen Ryan’s latest article for the Chicago Tribune, she interviews Greg Daniels, executive producer for The Office.

For the show’s Season 2 finale, “I’d like to get a supersized episode, because it’s a really long script with a lot of good stuff,” Daniels said in a recent phone interview. “So I would like to now address [NBC Universal Television Group CEO] Jeff Zucker through the Chicago newspapers and say, ‘Please give us extra time.’”

A grass roots movement was then born.

Please sign the petition at www.supersizedoffice.com and let your voice be heard on this important national issue! An extra 30 minutes is at stake. (That’s what she said.) 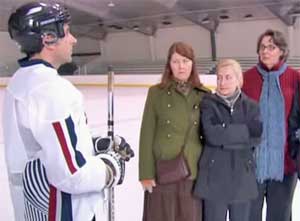 Here’s a medley of promos for The Office that aired during the 2006 Turin Olympics.

These promos are included on The Office Season 2 DVD, disc 4.

This is kind of old news, but I thought I’d post it anyway because it always makes me smile when I look at this photo: 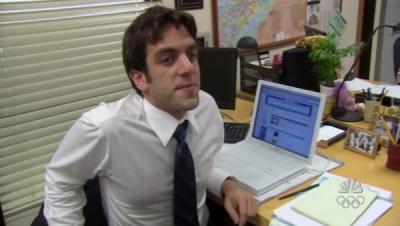 This is from the opening sequence of The Fight (where Dwight is searching for his desk). Note that MySpace is on Ryan’s computer screen!

The cast has said that they have working Internet connections on set — this is proof!

Entertainment Weekly did a great 6-page article of The Office, including some nice photos of the Fab Five.

For more pics, head on over to Northern Attack.

Hailing The Office’s Unsung Heroes!
by Jenna Fischer, aka “Pam”

I’ve talked a lot about the writers, directors and producers behind The Office [returning with new episodes March 2 at 9:30 pm/ET, on NBC]. But there is another, often overlooked, group of people who are just as essential to creating the environment at Dunder-Mifflin. They are the set-dressing, props and art departments. Led by our production designer, Michael Gallenberg, these departments work together to create our authentic office atmosphere. Michael might be our most underappreciated genius. He has an overall vision for our office environment and oversees even the smallest details. If he does his job right, no one notices. He’s not supposed to razzle-dazzle you. He makes sure each department works to create the most real-looking sets possible.

The set-dressing folks, headed by Steve Rostine, choose the desks, the wall hangings, the plants, the lamps. They fill the shelves with random clutter. They are the ones who make sure we have lighted EXIT signs over our fake doors. If you get our Season 1 DVD, you will notice that in the first few episodes my office chair didn’t have arms. I really wanted one with arms so I talked to these guys and they ordered a new chair for me. Pretty cool, huh? I’m such a diva.

The props department works closely with the actors, since they are responsible for anything an actor might hold in his/her hand or use specifically in a scene. Pam’s teapot, Dwight’s bobblehead, Meredith’s sippy cup and Phyllis’ flowers from Bob Vance are all examples of props. I worked with Philip Shea, the head of our props department, to pick out Pam’s engagement ring. We went through two trays of rings before settling on a 14K-gold-and-diamond-cluster ring worth about $80. (Roy’s not much of a spender.) Philip also asked me what color teapot I thought would be Pam’s favorite. In the Christmas episode, our on-set props assistant, Doug Abrahamson, had to wrap and rewrap the teapot between every take. We did that scene over a dozen times.

The art department is responsible for any type of card, sign, certificate or logo created specifically for our show. For example, they created the Dunder-Mifflin logo. They designed the greeting card that we give to Meredith for her birthday. They also created that horrible poster of the babies playing jazz that Angela gets in the Christmas-party episode. That poster made us all laugh so hard, the writers gave it another plotline in a future episode. Everything is subtle and wonderful.

These guys have a good sense of humor, too. If you look closely at the certificates they made for the walls of the office, they are quite hilarious. Here are some of my favorites:

Or there is this one:

Paper Manufacturers Conglomerate presents the Pulp Tonnage Award in recognition of the company’s outstanding use of over 50 megatons of raw pulp in one year.

It is a very popular thing on TV shows to put the names of crew members on the decorations around the set as an inside joke. We have a “Dunder-Mifflin Salesman of the Year” plaque and a “Humanitarian of the Year” certificate that feature the names of several crew members. Our first-assistant director, Kelly Cantley, was upset that her name didn’t make it on any of the decorations around the set. I guess she complained, so they made this one up especially for her and hung it on the pole by Stanley’s desk:

Whereas it came to our attention that Kelly Cantley was whining that a lowly second assistant director had a plaque with her name on it and whereas Kelly Cantley made a comment on the air regarding that fact… we have decided to give her this certificate because we love her.

So, it’s not just the actors and writers who get to have fun. Our crew is pretty darn cool as well. We spend a lot of time sitting around the set, and it’s fun to find their little jokes posted here and there. It’s like a treasure hunt! Thanks for all your hard work, guys, and for keeping me entertained in the process.