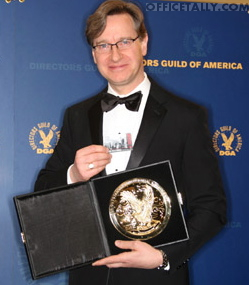 A lolcat inspired by The Office Season 5 episode, The Duel: 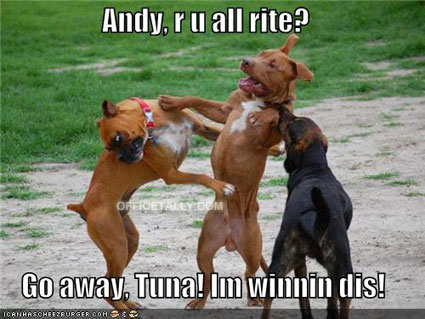 Jim: Andy, are you all right? Andy: Go away, Tuna! I’m winning this!

Here is Jenna Fischer’s visit to The Tonight Show with Jay Leno last night. It includes another clip from the post-Super Bowl episode!

From IGN: Jennifer Celotta explained that the movie plot is “A Harold and Maude type movie where Jack Black is engaged to Jessica Alba and then meets her grandmother — her nana — and instantly falls in love with Cloris Leachman.”

From Zap2it: “[Paul] Lieberstein says that the stunt casting of Jack Black, Jessica Alba and Cloris Leachman in the Office Super Bowl episode was not a mandate from on high, but rather grew out of an idea from writer Aaron Shure.

Viewers will only see a little bit of footage from the fake film, and since Black and Co. only shot for a day, Lieberstein says there’s not a ton of extra footage to showcase on a DVD release.”

TV by the Numbers states “The episode of NBC’s The Office following the Super Bowl is likely to be seen by 25 million viewers if the recent past viewership of the ‘Program After The Super Bowl’ is any indication.” More here.

Cloris Leachman displays some serious PDA with Jack Black in an upcoming episode of The Office.

“I have an intimate scene with Jack Black,” Leachman — who recently competed on Dancing With the Stars — told Entertainment Tonight Tuesday while prepping for her role as Grand Marshall at the Tournament of Roses New Years Day parade.

This plot point has been confirmed by my Office source.

NBC has confirmed to me that ‘Stress Relief’ was written by Paul Lieberstein and directed by Jeffrey Blitz.

KorbiTV reports that Cloris Leachman will also appear in the episode.

Actress Jessica Alba (“Fantastic Four,”) is set to guest star in the upcoming post Super Bowl episode of “The Office.” The announcement was made by Angela Bromstad, President, Primetime Entertainment, NBC and Universal Media Studios.

In one plot of the special post Super Bowl episode of “The Office,” some of the office workers try to secretly watch a bootlegged Hollywood movie during the workday. Alba and comedic actor Jack Black will play characters in the bootleg movie.

In one plot of the special post Super Bowl episode of “The Office,” some of the office workers try to secretly watch a bootlegged Hollywood movie during the workday. The movie stars Jack Black and other notable Hollywood actors.

Guess who is guest starring on this episode?

According to people familiar with the plotline, NBC’s just-confirmed post-Super Bowl episode of “The Office” will feature the employees of Dunder Mifflin roasting the show’s lead character, played by Steve Carell.

The roast of Mr. Scott will not be celebrity-driven, but producers are exploring the idea of incorporating some stunt casting into the project.

More about the episode at the link below.

Immediately following “Super Bowl XLIII” on February 1, NBC will broadcast an original, hour-long episode of “The Office” (10:30-11:30 p.m. ET; simultaneously to all time zones). Noteworthy announcements regarding this special episode are forthcoming.

Simultaneous to all timezones! That means I’ll finally be able to watch an episode without having read spoilerish comments first! WOO! ;)

But what does “noteworthy announcements” mean? Hmmm …

The votes have been tallied and the most popular entries in The Office Lolcat Contest 2009 are:

Congratulations to the winners! You’ll each receive an Office goodies box. Look for an email from me by the end of the week.

And thank you so much to all that entered! It was a joy to giggle through all the entries. Who knew that quotes from The Office and silly photos of cats would go together so well. :) 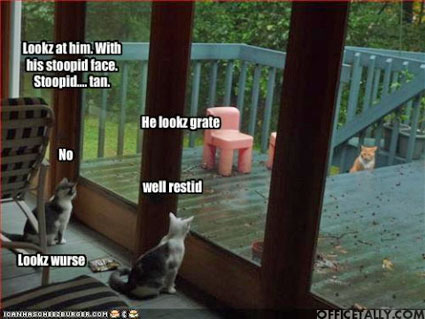 One of the best moments of the evening: