Sad Happy Sucker is an absurdist comedy produced by The Office’s Jenna Fischer and written by her husband, Lee Kirk. It plays at the Lyric Hyperion Theatre in Los Angeles August 20 – October 10.

Jenna Fischer’s blog about the Emmys

Ricky Gervais complains about the lack of alcohol:

Previously posted Emmy 2010 news on the next page.

STATUS: congratulations to James (136), Yolanda (149), and Oliver (54) — you’ve been chosen as the Survivor Season 6 Giveaway winners! You’ve each won a Target box with Office goodies. Watch your inbox for an email from me. 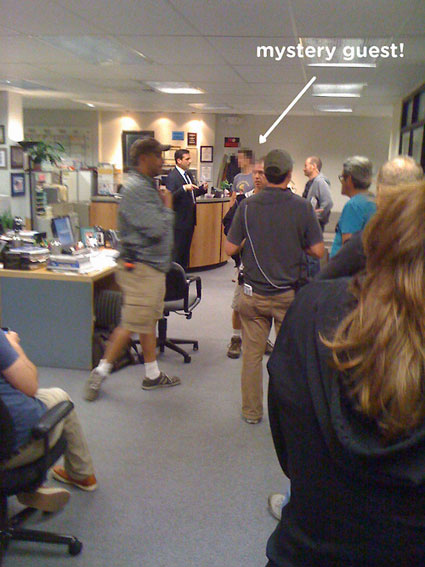 Posted with permission by Mike Mitchell.

During The Hollywood Reporter’s Emmy roundtable discussion, The Office’s Mindy Kaling talks about her role as a writer/actor on the show.

Mindy is nominated for a Best Comedy Writing Emmy along with her co-writer and The Office executive producer Greg Daniels for the wedding episode ‘Niagara.’

The awards show airs this Sunday, August 29, on NBC.

Put the most attractive beets on top. The ones that make you pull the car over and go, “Wow, I need this beet right now.” Those are the money beets.

Host Jimmy Fallon will read fan tweets as he introduces the various Emmy presenters, including The Office’s John Krasinski!

OfficeTally Survivor Poll is a series of fan polls posted in the summer following a full season of episodes.

Similar to the ‘Survivor’ reality show, you’ll “vote off” your least favorite Season 6 Office episode in each poll, until the lone survivor and most popular episode remains.

In some of the most anticlimactic news ever posted on OfficeTally, the episode Niagara has won Survivor Season 6 as the ultimate survivor! The Delivery landed in the number 2 spot.

I’ll be randomly picking three winners from the Survivor Season 6 Giveaway, and then we’ll move on to the final big poll of the summer, the All-Time Fan Favorite Poll. I think this time around, you guys should pick your favorite 10 or so episodes, what do you think?

Thanks for playing Survivor! Here are the final rankings. END_OF_DOCUMENT_TOKEN_TO_BE_REPLACED