A Mindset Media study suggests that which TV shows you watch can say a lot about your personality. It analyzed self-reported data of fans of more than 70 TV shows, including Mad Men, Family Guy, Glee, Dancing With The Stars, The Biggest Loser, Real Housewives of Orange County, and of course, The Office.

Here’s what the study said about The Office viewers:

Like Michael on the show, watchers of “The Office” think they are superior to others. In fact, folks who consider themselves superior to others are 47% more likely to watch this show. These alpha dogs believe they are extraordinary and happily brag about their accomplishments. They also prefer to be in charge, directing others rather than being directed.

What’s your opinion on this study?

Link: You Are What You Watch, Market Data Suggest

From The Office 2010 DVD Calendar. 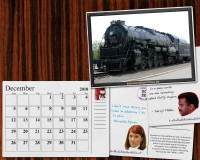 Previous months’ calendar starting on the next page.

Here are promos of The Office episode Christening, airing November 4, 2010.