Here is a video transcript of Ed Helms’ Funny or Die live chat with fans.

Did Ed answer any of your questions? 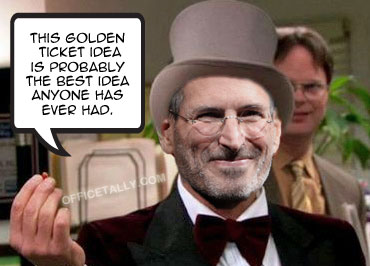 Just like Michael Scott did in The Office Season 5 episode, Golden Ticket, Steve Jobs had a golden ticket idea to promote the launch of the iMac:

Steve’s idea was to do a Willy Wonka with it. Just as Wonka did in the movie, Steve wanted to put a golden certificate representing the millionth iMac inside the box of one iMac, and publicize that fact. Whoever opened the lucky iMac box would be refunded the purchase price and be flown to Cupertino, where he or she (and, presumably, the accompanying family) would be taken on a tour of the Apple campus.

Steve had already instructed his internal creative group to design a prototype golden certificate, which he shared with us. But the killer was that Steve wanted to go all out on this. He wanted to meet the lucky winner in full Willy Wonka garb. Yes, complete with top hat and tails.

This excerpt is from the book Insanely Simple: The Obsession That Drives Apple’s Success by Ken Segall.

END_OF_DOCUMENT_TOKEN_TO_BE_REPLACED

Here’s The Office’s Ed Helms and Angela Kinsey in The Bluegrass Brainwash Conspiracy, from Funny or Die.

All you need to know about Recyclops, Dwight Schrute’s green alter ego on The Office.

END_OF_DOCUMENT_TOKEN_TO_BE_REPLACED

Here are photos from The Office episode, Free Family Portrait Studio, airing May 10, 2012.

END_OF_DOCUMENT_TOKEN_TO_BE_REPLACED

Here are photos from The Office episode, Fundraiser, airing April 26, 2012.

END_OF_DOCUMENT_TOKEN_TO_BE_REPLACED

One of the greatest pleasures of watching The Office: Kelly and Ryan.