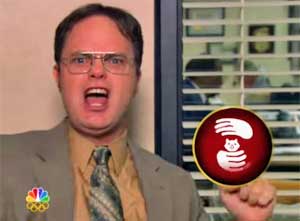 Ed Helms gets his banjo on with Reggie Watts from Comedy Bang! Bang!

For another impromptu jam, check out Mindy’s Song.

As part of SoulPancake’s Metaphysical Milkshake series, Blake Griffin of the Los Angeles Clippers joins Rainn Wilson in the back of his van to talk about the Olympics, basketball, knee surgery, and life’s big questions.

Vulture reports that Mindy Kaling will return for The Office Season 9:

… Kaling and the producers of The Office have worked out a deal for the actress to return to the NBC comedy for at least two episodes of the show’s ninth season.

“I think I’m going to be in the premiere, and maybe another episode,” [Mindy] said. “I got attached to that character. It’s fun to see what’s going to happen to Kelly.” 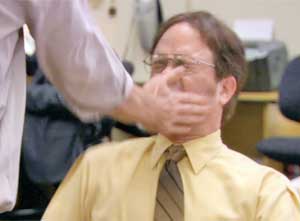 This promo of The Office aired during the opening ceremonies of the Beijing 2008 Olympics.

Tipsters: all East Coast Tallyheads who sent this in! You rock!

Here’s a clip with Blake Griffin from last year’s special.

Brian gets a lesson in explosiveness (and an alley-oop) from 2010 Slam Dunk Champion Blake Griffin.

It’s not a complete episode of The Office without a look to the camera by Jim Halpert (John Krasinski)!