Congratulations to The Office editors David Rogers and Claire Scanlon for winning the ACE Award in the “Best Edited Half-Hour Series for Television” category for their work on Finale!

The Office editors David Rogers and Claire Scanlon have been nominated for an ACE Award in the “Best Edited Half-Hour Series for Television” category for their work on Finale.

(David and Claire won the Emmy back in September.)

The American Cinema Editors will announce the winners on February 7 at the Beverly Hilton.

The Office received a People’s Choice Award nomination today in the category of “Favorite Series We Miss Most.”

Vote for The Office here! 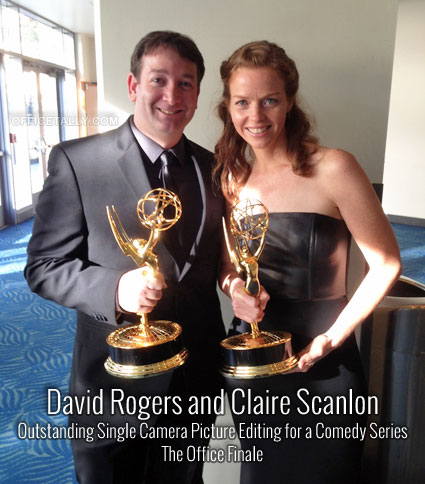 The Office’s David Rogers and Claire Scanlon have won the Emmy for Outstanding Single Camera Picture Editing for a Comedy Series for their work on Finale!

Woo hoo! So happy for you both! CONGRATULATIONS!

(And you guys look stylin’.)

The Office has been nominated for four 2013 Emmys!

Outstanding Writing for a Comedy Series

Here’s what The Office submitted for the 2013 Emmy ballot. END_OF_DOCUMENT_TOKEN_TO_BE_REPLACED

The Critics’ Choice Television Awards have named their top seven best TV moments of the past season.

Michael Scott’s return in The Office finale counts as one of them!

Let’s vote it up for the win, shall we?

Link: Cast your vote for Michael’s return (voting is closed)

Some photos of ‘The Office’ cast at tonight’s SAG Awards.

You’ll always be ‘Best Comedic Ensemble’ to us. xoxo