Unlike the birth of Jim and Pam’s first child Cecelia (“Cece”), which featured prominently in Season 6’s double episode The Delivery, Cece’s little brother Philip came into the world this week with little fanfare.

Pam wrote about Philip’s birth at the Halpert Baby blog:

It’s official! I’ve said goodbye to my lovely lady bump, and hello to baby Philip Halpert!!! Everything went really smoothly. He was delivered completely healthy, and so happy that he was giving a thumbs up on the way out. Afterward, I had to stay for the recommended 48-hours (which is a little long to be eating questionable hospital soup and rock hard rolls, but I made it through).

Jim asked the doctor if there’s anything I should avoid while recovering from childbirth, and I shouted out, “Yes! Pregnancy!” LOL. When we brought Philip home, Cece was overwhelmed with emotion. First she threw her Vtech at the wall and started crying, but then all she wanted to do was be near him. It was pretty adorable. Now I just need to get her to be able to say “Philip” instead of “Pull-Up” so I’m not instinctively rushing to her side with Huggies every time :) 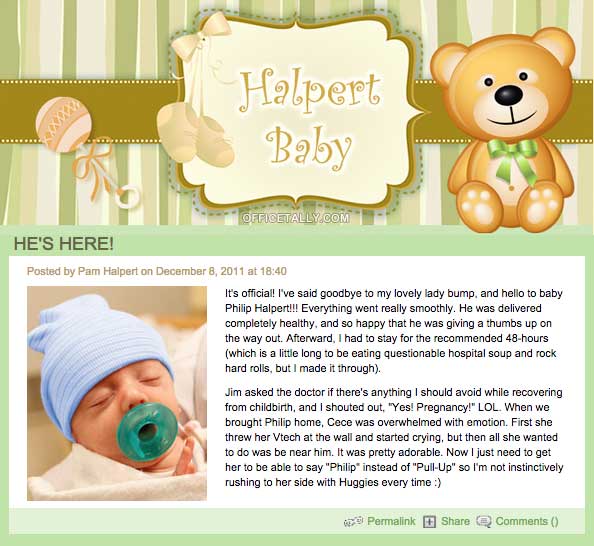