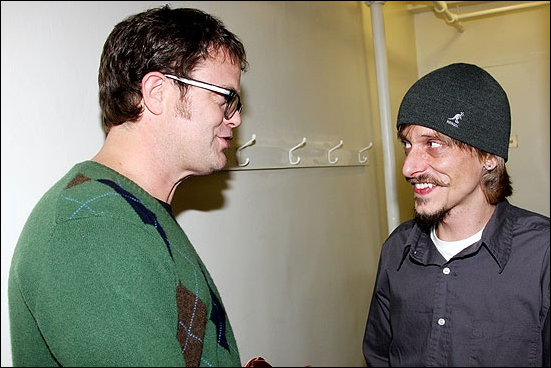 For fans who’ve followed The Office from its original incarnation on the BBC to the American version on NBC, it was a historic moment. On November 18, while backstage at the Walter Kerr Theatre, Dwight Schrute introduced himself to Gareth Keenan. Or, to use non-Office terminology, Rainn Wilson met MacKenzie Crook. Currently starring as Konstantin in The Seagull, Crook first played the role of Gareth, The Office’s resident oddball and possible psycho, when the U.K. series debuted in 2001. Then in 2005, Wilson transformed Gareth into the just-as-odd if less creepy Dwight in the U.S. remake, which became a primetime hit. No matter what side of the pond, both creations struck comedy gold. Hats off to Crook and Wilson!