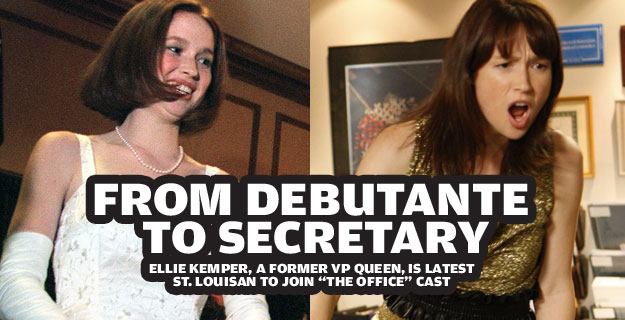 In 1999, in a white satin gown, Elizabeth Claire Kemper was attended by maids and pages as the Veiled Prophet’s Queen of Love and Beauty.

In 2009, in gold lamé and tall black boots, Ellie Kemper struts through a music-video spoof in a webisode for “The Office.”

The girl who led an undefeated field hockey team as a member of John Burroughs’ class of 1998 found her passion not on the playing field but in performing.

Kemper, 29, was hired last season to fill in for a few episodes as the receptionist on “The Office.” Producers were charmed and in June asked Kemper to become a regular on the NBC comedy. Since September, she’s been answering the phone at the Dunder Mifflin paper company and playing an increasingly large role in “Office” story lines.

Critics are noticing. Variety named her one of its “10 comics to watch.” Alan Sepinwall of the Newark Star-Ledger praised the “infectious joy and sweetness” she has brought to the show. Others have called her fresh, adorable and “appealingly goofy.”

A bit of that goofiness carries over into real life, too. After publicists failed to connect a planned phone interview, Kemper pulled into a Los Angeles parking lot to call from her car — only to be interrupted by a man knocking persistently on her window, asking to repair the big dent she got while figuring out LA traffic.

Working on “The Office,” a show she loved, is “the coolest job on Earth,” Kemper says.

She first auditioned when executive producer Greg Daniels was casting a new, then untitled comedy that turned out to be “Parks and Recreation.” When the opening on “The Office” came up, she got another call, “and I felt more comfortable going in because I’d met them before.”

Originally, Erin was “different from who she is now,” Kemper recalls. “The scenes I read for the audition were more ‘Office’-esque, more sarcastic and dry. They’ve tweaked the character a lot, so now she’s more of an exaggerated version of myself. It’s fun for me to play her, and this is such a cool place to be.”

Cast mates, including fellow St. Louisans Jenna Fischer and Phyllis Smith, have made things easy for her, Kemper says.

“We have this little St. Louis clique here, and that’s so great. It’s nice to be able to talk to people who come from where you do. I acted like such a dork when I came on last spring. I went up to Jenna and I was like, ‘I’m from St. Louis, too!'”

As a whole, the cast couldn’t have been more welcoming to the new girl, Kemper says.

“These people are all so grounded,” she says. “I haven’t had a lot of experience, but this cast is just so nice.”

Even lead Steve Carell doesn’t give a hint that “he’s this really big star,” she says. “He is honestly the nicest person ever.”

“They’re funny, aren’t they?” Kemper asks of the webisodes, remarking on her “insane costume” and praising Kaling as “so talented, plus such a normal person.”

Kemper’s passion for performing started at John Burroughs, where she acted in “every play and musical I could.”

She was particularly taken with improvisational comedy, and not just because one of her teachers was Jon Hamm, who was 10 years ahead of her at Burroughs and taught there when she was a freshman.

Hamm, now the star of the Emmy-winning “Mad Men,” played the lead in Kemper’s high school play, “Stage Door.” Thus she can legitimately say she performed with Jon Hamm, and she can also say he’s watched her perform; last spring, when she brought a one-woman show (“Feeling Sad/Mad With Ellie Kemper”) to LA from New York, she invited Hamm, and he attended.

“Everyone was all ga-ga over him,” she says with a giggle.

After high school, Kemper attended Princeton University, performing with the improv group Quipfire! and the venerable Princeton Triangle Club, a touring musical-comedy troupe. She graduated in 2002 with a degree in English and attended Oxford University for a year.

“I was in an English Studies program, but I knew that wasn’t what I wanted to do,” she ays.

Instead, Kemper headed for New York.

“I knew it was an uncertain path, but I had to try it for a couple of years and see what happened,” she says.

Kemper got an agent and supported herself by landing “a lucky string of commercials” while taking classes at the Upright Citizens Brigade Theatre and People’s Improv. She performed improv, mostly unpaid, and teamed with Scott Eckert, a fellow veteran of Princeton’s Quipfire! Group, to write sketch shows.

Writing is as much a passion as performing, and Kemper wrote for the satirical newspaper the Onion and literary humor magazine McSweeney’s and appeared in sketches for “Late Night With Conan O’Brien” and “Important Things With Demetri Martin.”

Back home, her parents, David and Dotty Kemper, “helped me stay afloat that first year, and they were always emotionally supportive,” Kemper says.

His daughter’s persistence doesn’t surprise David Kemper, chairman and CEO of Commerce Bancshares. “She has always been very focused and organized, and she was a very good student,” he says.

His daughter’s success as a performer is no surprise, either.

“She always had a lot of poise on stage,” her father says, recalling how 5-year-old Ellie skipped to the piano at a CASA recital and played for a room full of adults without missing a beat.”

Wayne Salomon, head of the theater department at Burroughs, isn’t surprised at Kemper’s success. He clearly recalls her as far back as ninth grade in a production of “Godspell,” where she was “awesomely funny” as the Seed in “The Parable of the Seed.”

“Ellie has this amazing natural sense of humor,” Salomon says. “Actually, the whole family does. Her mother, Dotty, is hilarious.”

The second of four Kemper kids, Ellie was born into a family of bankers. The Kemper family founded Commerce Bancshares, based in Kansas City, and Ellie was born there, moving to St. Louis at age 5 when the bank established headquarters here. Her grandmother was Mildred Lane Kemper, whose name is on the art museum opened in 2006 at Washington University; the Kemper family gave $5 million to the project.

Ellie attended the Conway School in Ladue and then Burroughs, where “I was really into everything,” especially athletics. At Princeton, where her field hockey team went to the national championship her freshman year, she spent “most of my time on the bench, which turned out to be a lucky break, because I quit and got into performing.”

Kemper has been coming home to St. Louis a lot lately, since her older brother John, 34, and his wife, Ashley, had a baby boy, Brennan, in July. Brother Billy, 20, is a junior at Stanford University. Sister Carrie, 25, a comedy writer, lives in Los Angeles and has been an anchor for Ellie in recent months.

“I am liking having a job out here,” says Kemper, who moved from New York when “The Office” called.

If working on “The Office” is a dream come true, there’s one drawback.

“It’s the coolest job on Earth, but it’s also a job in an office,” she points out. “I’m always sitting, and there’s so much food around. Craft service feeds you constantly. I’ve gotten like, hey, why isn’t there any mac and cheese?”

And that’s bad why?

“I’m worried about getting secretary spread!”