Here is her report! (Thanks, Emily!)

Ok, let me just begin by saying, COOLEST DAY EVER!!!

When I got there I went into the greenroom which is a room where there is live camera feed from the two cameras used in the shooting.

While we were in there, Kate Flannery, Angela Kinsey, and Rainn Wilson all walked in and said hi. Then, Ed Helms, who was my connection, came in and said hi and then took us to go have lunch with him.

The food was pretty good, we had the craft food for lunch and we sat in a room with these really long tables where mostly everyone ate.

After lunch I went on a tour of the set and saw some cool stuff and some things, like Jim’s new office and the location of Pam’s desk that I wasn’t allowed to tell anyone about for a while (because i went in the third or fourth week in august).

Waiting in line for lunch, heard someone call my name and I turned around and it was Oscar saying hi which was so cool and unexpected!

Also, while in line for lunch, I was right behind Angela Kinsey and to the side of Jenna Fischer, which was AWESOME!!! During lunch, Ed Helms, introduced me to Rainn Wilson, so I got to talk to him for a little bit. And, while eating, I was two seats away from Phyllis and Stanley (Leslie David Baker)!

The only people I didn’t see were Steve Carell and John Krasinski, who were there but didn’t come out with the rest of the cast for lunch.

My favorite part however was probably when Ed introduced me to Angela and she thought we were related, which we aren’t!

What I saw them film was the cold open for the wedding episode, so I got to see everyone throw up a bunch of times and then go to lunch. LOL! :)

After my tour, Dave Rogers, one of the editors (featured in an “Adventure with Angela”) showed me a ton of clips from “The Promotion.”

Something that surprised me was how tall everyone was, except for Angela :) and everyone was really really, attractive, like, really good looking.

Everyone there was sooo nice and I mean EVERYONE cast and crew, and I was so grateful that I was able to go, it was the coolest thing I have ever done. 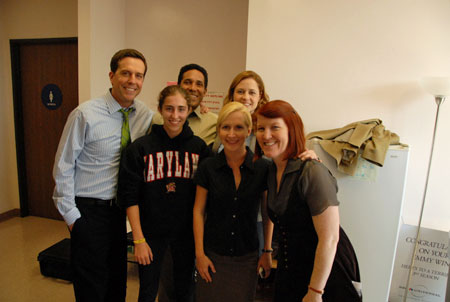 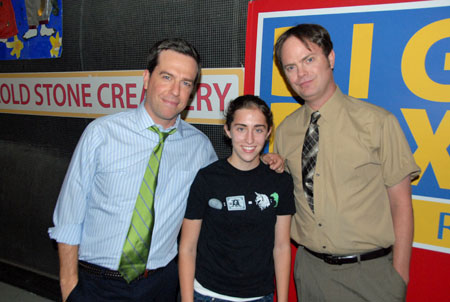 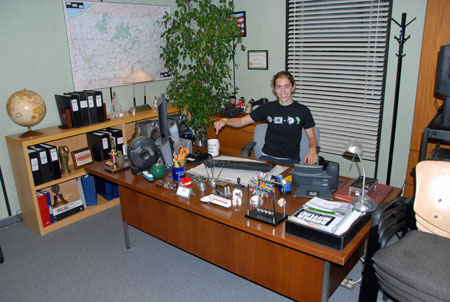