Me and Kevin got to the Skirball Center at 6 when it started and went to look at all of the auction goodness … And goodness there was!

Unfortunately, all of the Office stuff was grouped together in one auction (2 signed photos, signed Pam and Angela bobble heads, signed season 3 dvd set, a coffee tumbler and probably something else I’m forgetting). There was another Office fan there who really really wanted it all, so I wasn’t going to bid against her and ruin her night.

Plus what I really wanted … was the necklace that Jenna wore in the wedding episode of The Office this year. That was saved for the live auction later that night and in the end … it was too rich for my blood. 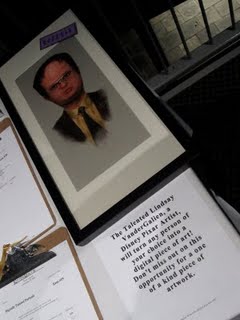 Okay so we kept going and finally came across the piece that I was auctioning off. A personalized digital portrait of whoever you wanted … and if you can believe it … someone bid on it!!! For an example to set out, I sent in a framed version of my ‘Dwight’ Office painting that I did a little while ago.

Then we went outside and got some drinks, it was freezing outside so we weren’t out there very long before coming in and just taking a breather at the table. We sat at Jenna Fischer’s table this year so we didn’t have to scout out and reserve seats like last year. Here is where I met the other Office fan Kristina from last year.

We walked the auction again when Jenna Fischer and her fiance Lee got there and they not only saw, but complimented my Dwight painting … COMPLIMENTED!! Eventually everyone sat at the table and the show began … I sat next to Jenna’s fiance Lee who was really nice and I wish I had gotten to chat with him more, but I didn’t want to be rude during the event. He asked if I did the “Office” paintings for a living … which was very sweet :).

Jenna was a great host and super funny, awards were given, videos were shown, food was devoured (kudos on the salad and desert … sooo good!), and then they did the live auction of Jenna’s dress she was wearing, the wedding necklace and a vacation package. There was probably more, but I forget …

Afterwards Jenna came over and we chatted for a little while and I asked if she would mind taking a picture. (Big thanks to Lee for taking it!) 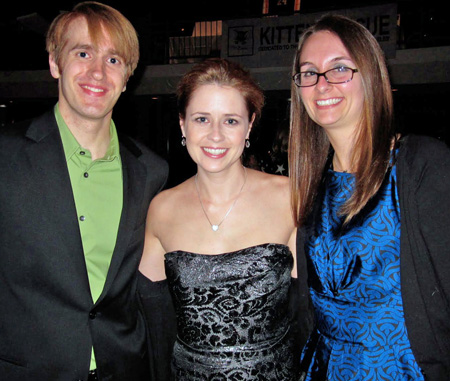 [from tanster: Lindsay also designed the official Fur Ball poster. Awesome report, Lindsay, thanks so much for sharing! :) ]