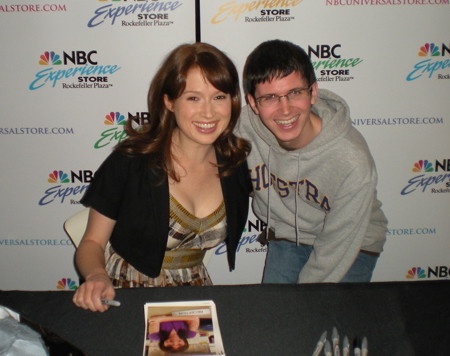 Got there around 7am, ended up being ridiculously early because pretty much nobody even showed up until 10:30am and the ones that were there didn’t even know who Ellie Kemper was but just wanted the free game (sickening, I know!). Even though I was so early, I was glad because they were bringing in the Rock Center Christmas Tree on the semi and I got to be there while Al Roker strolled in atop it! Then they hoisted it in the air and everything, it was quite a sight.

Ok, back to Ellie, I was first in line to meet her at 11am and she was sooooo wonderful! Seriously, the nicest “celebrity” I have ever met. She was like “I’m so sorry, I’ve never done this before!” (in regards to meeting fans in public, etc). We talked for a few minutes, mostly about Office and how awesome Erin is and she graciously signed a couple photos for me and took a picture with me.