how are you guys? It’s been a long time since my last blog so I thought today I’d share a few little moments….

1-We are having a real thermostat war on set. It is the guys against the gals. The girls keep putting little heaters everywhere and some how they end up blowing warm air right in Brian’s direction. Then the guys move them. Then we freeze and we move them back. Fascinating, I know but it is freezing on this set! Jenna, Kate, Phyllis, Mindy and I are determined to win this weird game of wills.

2-We now have a ping pong table set up in the warehouse set. There are some pretty serious games going on over there.

3-Our hot snack for the day: hot dogs and soup.

4-Oscar bought Isabel a little hoodie sweatshirt! And a little dress (which she wore for Thanksgiving). He loves to buy her clothes. I will show up to work and there will be a little bag with a note in it from him. It’s adorable.

6-Nbc.com loaned me a camera to film behind the scenes stuff for them but all I do is film Isabel. :/ Sorry nbc.com. I promise to film something soon.

7-We talk about food a lot lately? Is that because it is the holidays or that it’s colder or something? Karen (in our wardrobe department is from Ireland) told me about an Irish dish called “A Dublin Lawyer”. It’s poached lobster in a whiskey sauce.

8-Oscar is watching Wu Shu training on youtube. Oh and he is obsessed with 52 Blocks. He just told me not to explain 52 Blocks to you. He says you’ll figure it out.

9-In last week’s episode, there will definitely be a scene on the gag reel. Rainn, Ed and I could not get through the scene where Dwight tells us directions to Schrute Farms. We all kept losing it! And Rainn kept making up more and more ridiculous directions. We were a mess.

10-We were all sitting on set between scenes and Creed yelled frantically, “Help! Help me!” We all jumped up thinking something was very wrong with him. Turns out his computer was frozen. :p

12-My Christmas Tree scene in this week’s episode was a lot of fun. I did it in two takes. I had the bruises and scratches to prove it and I was so proud of them. I kept showing them to people like they were some kind of trophy. I love doing physical comedy.

Oh and my friend’s mom told me that I had random music on my profile page. I don’t know how that happened. I’m not making any kind of statement with my music choice. It is supposed to be The Office theme song. ;)

Ya’ll have a good week! 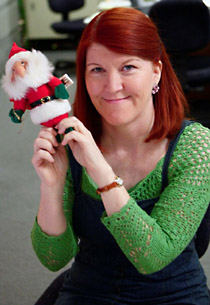 It’s the Office drunk again! Hey, remember my weekly blogs? I have been AWOL this season. But it’s Christmastime at Dunder Mifflin and the redhead in the corner is about to embark on a journey, in this week’s “Moroccan Christmas.”

This episode was so much fun to shoot. Angela and Phyllis have some major power struggles, and Dwight has a little business going. Yup, one of the most rewarding episodes for me, personally. Sometimes I have to pinch myself, I am so grateful. Steve Carell and I had some physical comedy together — maybe the most fun I have ever had working in front of a camera. Steve is great in group scenes, fantastic by himself and even better one-on-one. He is a great actor first and a comedic genius second. This is another great Christmas episode of The Office.

Have you started your shopping yet? I recommend gift certificates from Outback Steak House. Mmmmmm. Makes a great stocking stuffer! “That’s what she said!”

Speaking of Christmas, I forgot Thanksgiving. Just two weeks ago Oscar Nunez and I got flown to NYC to do an interview with the very sexy Al Roker at the Macy’s Thanksgiving Parade. Crazy, huh? What a dream come true! I have watched that parade religiously since 1977, when the kids from Annie got to do a number. So much fun! No, floats for us, and there was no lip-synching, but we had a ball. I wore this bright green wool 1950s suit that my twin sister Susie bought me last year in the East Village. We were right in front of the Sesame Street float with the real Gordon, Maria, Bob, Elmo, Cookie Monster, Big Bird and all. How surreal when they caught our eye and started yelling to us that they love The Office! They made it a point to get our Oscar to look at Oscar the Grouch! Who needs to drop acid?

After that we walked about 15 blocks in the parade to screaming Office fans who stopped us for photos. We went to see Craig Robinson (aka Darryl) play at Caroline’s that weekend. He was hilarious and the Office fans came out in full force. The Office fans are the best in the world!

Back to this week’s episode. I can’t give away too much, but did I mention that Meredith’s hair catches on fire? This is one episode that I did not do my own stunt. Doing my stunts in “Fun Run” (where Michael hits me with his car), “Business School” (with the bat) and “Night Out” (the football in the face) were easy by comparison. No broken bones, and no paramedics so far, so I didn’t want to push my luck. I have been in enough bad relationships in my life, I am not messing with fire.

Merry “Moroccan Christmas” from all of us on The Office — Steve, Jenna, John, Rainn, Angela, Ed, Brian, Oscar, Phyllis, Leslie, Creed, Mindy, Paul, BJ, Andy, Melora, Craig, and me. Happy holidays, and may your 2009 be mighty, mighty fine!

I know the economy is bad but whatever you do, don’t drink at work! Keep your job as long as you can. We’ll get through this. Together we can make it. Don’t forget, we will soon have our first Scranton-born Vice President in office. Not Dwight! Joe Biden seems pretty cool now, because of The Office, right?

I have missed you all terribly. NBC.com has a new Meredith blog this season. Have you read it yet? It’s called “Sex and the Electric City.” Please check it out and leave a comment here or there. Tell me what you think.

And remember, watch, TiVo or tape the funniest Christmas episode since I took my top off. 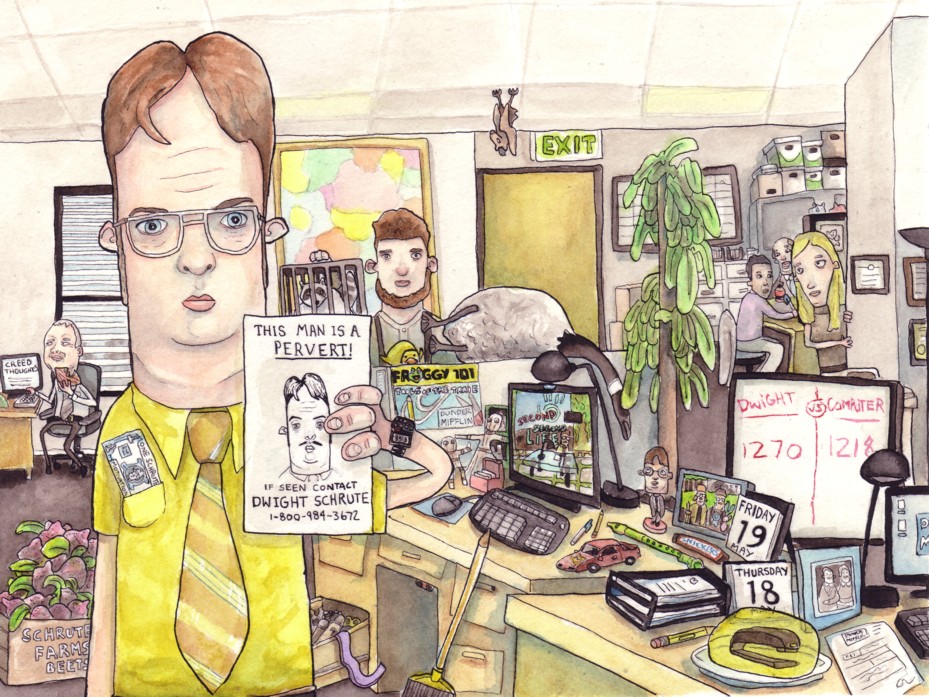 How many details can you spot?

Previously posted videos on the next page.

The Office writing staff has been nominated for 2009 WGA Awards!

And a few non-Office nominations:

The winners will be announced on February 7, 2009.

I received this schedule from NBC about January 2009 episodes of The Office:

Subject to change, of course, but this is the latest!