The Office’s John Krasinski appeared on The Tonight Show with Conan O’Brien tonight.

Here are some wallpapers and icons from Subtle Sexuality!

END_OF_DOCUMENT_TOKEN_TO_BE_REPLACED

The Office webisode series “Subtle Sexuality” was written by Jonathan Hughes and Nate Federman, and directed by Mindy Kaling. It debuted on NBC.com October 29th.

Photos: Getting ready | Andy | Ryan | Behind the scenes

Other stuff: Wallpapers and icons | Lyrics and credits | News

Check out the vacation plans of the Dunder Mifflin Scranton staff, one day at a time!

Runs every weekday through December 25th.

Link: The Office 12 Days of Christmas

Remember the newspaper article that Stanley held up to the camera in Scott’s Tots? — the one detailing Michael Scott’s promise to a classroom of third graders that he would pay for their college education?

Even though the article is shown for only a few seconds, it was written with all the care and authenticity you’d expect from ‘The Office’ writing staff.

They even sought the help of Randy Shemanski from the real Scranton Times-Tribune and Electric City publications, who designed the actual newspaper for the story.

Here is Randy’s story and the full text of the Scott’s Tots article, courtesy of Tim from the Scranton Times-Tribune and The Office writing staff. Enjoy! 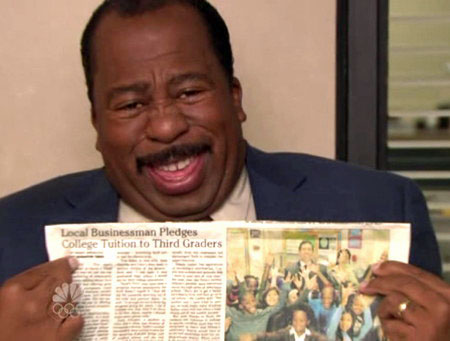 ‘The Office’ has been nominated for two Golden Globe awards:

Congratulations to Steve and everybody at The Office!

The awards show will air on January 17th, hosted by Ricky Gervais.

The nominations were presented this morning by The Office’s John Krasinski, Inglourious Basterds’ Diane Kruger, and Justin Timberlake. Justin says something to John that steals the show!) (7:40 mark)

The awards will be presented on February 20, 2010, in Los Angeles and New York.

Congratulations to The Office writing team!