Hulu’s 2011 Best In Show poll is now in its second round, and The Office is up against Vampire Diaries.

Vote for The Office to move to the next round!

A montage of Michael and Holly’s wacky and wonderful romance.

The Office’s John Krasinski surprises Conan during his chat with wife Emily Blunt.

‘Super’ is a film starring and produced by The Office’s Rainn Wilson and written/directed by James Gunn.

Summary: After his wife (Liv Tyler) leaves him for a drug dealer (Kevin Bacon), a frustrated husband (Rainn Wilson) decides he will win her back as Crimson Bolt, a costumed vigilante armed with a monkey wrench. His actions bring him an admirer, an overeager comic store clerk (Ellen Page) who wants to be his sidekick.

Here’s the official trailer for ‘Super.’

Yesterday was Steve Carell’s last day of filming on ‘The Office,’ and Rainn Wilson tweeted: “NBC bought Steve this AMAZING cake for his going away party. (Many tears were shed.). Oscar’s in the BG – you can see it’s like 3 feet high!” 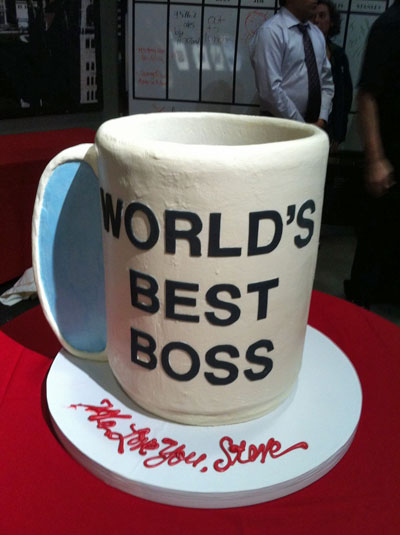 Jim and Dwight get back in the groove.