Previously posted finale news on the next page.

These photos are courtesy of The Office’s David Rogers. Thanks, Dave!

END_OF_DOCUMENT_TOKEN_TO_BE_REPLACED 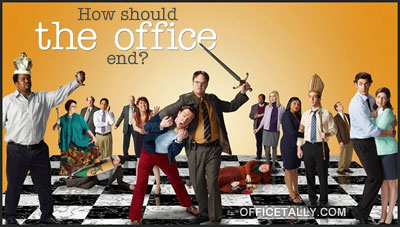 The Office will close its doors this May with a special one-hour farewell… the buzz is that the finale will air on Thursday, May 9.

… it’ll likely do so without Steve Carell’s original boss, Michael Scott. “I’m hopeful, but I don’t think [Steve] will be back,” NBC Chairman Robert Greenblatt told reporters Sunday the the Television Critics Association’s winter press tour in Pasadena. “He left in the way that he wanted that character to leave.”

Variety provides some insight on The Office table read for the season 7 finale, Search Committee.

[Paul] Lieberstein wrote the season finale, and once everyone gathers, two rows deep, around the rectangular conference table, the reading begins. Since “The Office” isn’t filmed in front of a studio audience, this is the best and only opportunity the writers have to hear the episode read from start to finish and gauge how it plays.