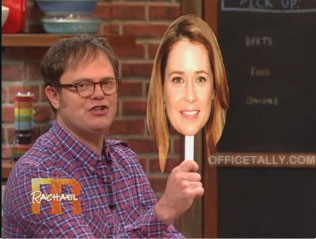 The Office’s Rainn Wilson appeared on the Rachael Ray Show today and dished on his fellow Office cast members!

Here’s what Rainn had to say about his fellow cast members on The Office:

Person most likely to do everything in the book SoulPancake:
“Jenna Fischer. I love her. She’s a brave, courageous gal.”

Most likely to talk about themselves:
“Jenna Fischer. Lovely lady. Gutsy lady. Talks about herself.”

Who would you trust to babysit your son?
“Craig Robinson is the sweetest, dearest human being on God’s green earth, and I would entrust him with Walter.”

Who would outwit, outplay, outlast, on Survivor?
“Steve Carell. He is a brilliant human being. Steve Carell would succeed at anything, any task you put in front of him. Put him on an island.”

Who would eat a double stack of pancakes?
Angela Kinsey. “She weighs about 81 pounds. In the morning, she will eat pancakes, sausages, and they will just disappear inside of her. She’s got hollow legs or something. This woman can just pack it away.”