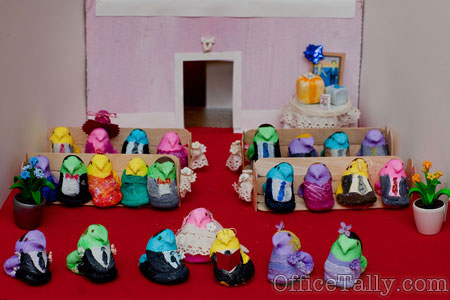 From Episode 6.4-6.5 “Niagara”
Scene: Jim and Pam’s wedding guests and party shortly after the wedding dance.

I did my best to accurately depict the scene. Since there were so many characters and extras involved, I had to leave some out, but I was sure to include all main characters! :) The placement on the Peeps isn’t exactly the same as in the episode, but I tried my best to group the characters like they were in the actual episode. Unfortunately, many of the details I included (like Kevin’s Kleenex box shoes, Pam’s torn veil, and Jim’s cut tie) are invisible because of the angle of the shot. Enjoy!