In the editing bay with Claire Scanlon

I got to watch editor/director Claire Scanlon edit scenes from the episode Livin’ the Dream.

Since multiple takes are shot of one scene, Claire’s got ’em all lined up as files on her computer. She’s also got a copy of the script in front of her, so she knows what the official lines are.

First she looks at all the takes of the main action, like Andy making the announcement that he’s leaving. Claire will then pick the best version of Andy’s announcement, and then clean it up, maybe getting rid of the “uhs” and “ummms.”

She scrutinizes every detail. At one point she says, “did you notice that Oscar just walked across the room like he was trying to get to his mark as fast as he could?” I’m like, lol, no, I didn’t notice that. But Claire notices, and like magic, she clicks her mouse and poof! — that little piece of film is deleted.

Then she’ll look at the takes of all the other characters’ reaction shots to Andy’s announcement, and tries to pick the best ones as the “sprinkles on top” of the main action. Psychology comes into play; Claire asks, “How would Meredith react in this scene? How would Dwight react?”

In the scene where Jim tries to take his desk back from Clark, remember Clark’s awesome line “it is very easy to get lost in Pete’s beautiful dead eyes”? In another take, he says “beautiful vacant eyes.” Is “dead” funnier than “vacant”? We decide yes.

When Jim decides to give up his desk to Clark, Pam says, “It’s okay. I’ll come visit you.” In one take, Jenna says it in a wholesome way; in another take, she says it more suggestively. The wholesome version is what ends up in the aired episode.

Can I just say, there is something about watching Pam on a big screen high-def TV that makes you truly marvel at how wonderful an actress Jenna Fischer is. She conveys a hundred emotions with her face. The movement is never big, it’s always subtle and quiet. I teared up so many times that week, just watching Jenna perform.

Thanks, Claire, for letting me spend time in the editing bay with you! It was super fun. I love watching how the show is put together. Magic happens on the front end as well as the back end. That’s what she said. 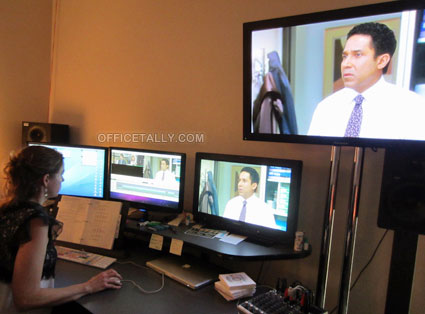