Here are deleted scenes from The Office episode Mrs. California.

The Gym for Muscles is just for muscles.
[Video no longer available]

Andy and Jim try to extricate themselves from Mr. and Mrs. California’s difficulties.
[Video no longer available] 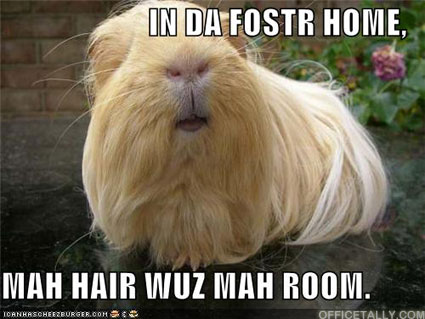 Inspired by a tweet I received from @hesrightbehindu, I’m happy to bring back the OfficeTally Lolcat Contest 2011: create a lolcat inspired by The Office for a chance to win The Office 2012 Calendar!

UPDATES: first, the deadline to submit an entry has been extended to tomorrow, December 3, 11pm PT. Second, Hallmark is generously providing the Michael Scott Keepsake Ornament to the first and second place winners! Get those entries in k?

END_OF_DOCUMENT_TOKEN_TO_BE_REPLACED

Holiday cheer is in short supply when Michael insists on doing a last-minute swap of Secret Santa gifts, and Jim becomes alarmed that his sweet and sentimental gift for Pam will end up in Dwight’s hands.

Michael gets his heart broken for the holidays by girlfriend Carol. Andy takes Michael out drinking, with Dwight and Jim, while tensions on the party planning committee between Angela, Pam and Karen cause rival parties to form.

Phyllis’ Moroccan-themed holiday party goes up in flames when Meredith’s hair catches on fire and Michael is forced to deal with the accident. Meanwhile, Dwight corners the market on the hottest toy of the Christmas season.

Michael is outraged when Jim allows Phyllis to be Santa at the office Christmas party. Jim and Dwight try to get everyone into the holiday spirit despite the uncertainty with Dunder Mifflin. Meanwhile, Oscar has a secret crush.

Holly Flax covers for Toby when he takes a leave of absence. Pam is forced to do a second Christmas party after Michael wants the party to be on the day Holly returns to Scranton. Jim regrets agreeing to a snowball fight with Dwight.

Andy tries to make this year’s Christmas the best ever by granting each person’s holiday wishes. Meanwhile, Robert California tries to drown his sorrows at the office party.

When the party planning committee drops the ball on the annual Christmas party, Dwight gets everyone to celebrate with a traditional Schrute German Christmas. Darryl fears Jim has forgotten his promise to take him along to the new job in Philadelphia. Meanwhile, Pete teaches Erin about his favorite movie Die Hard.