END_OF_DOCUMENT_TOKEN_TO_BE_REPLACED

It is a takeoff on the song “Seasons of Love” from the Broadway musical, Rent. END_OF_DOCUMENT_TOKEN_TO_BE_REPLACED 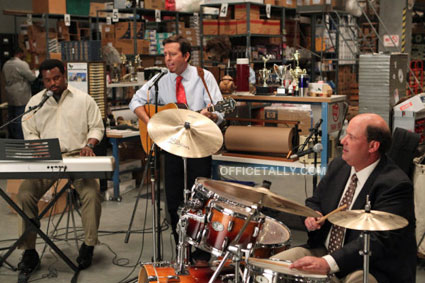 Here are the lyrics to The Office frog song “Bullfrog in Love,” performed by Andy, Darryl, and Kevin in the episode The Sting.

END_OF_DOCUMENT_TOKEN_TO_BE_REPLACED

The Office episode Nepotism kicked off Season 7 with a lip dub to the tune of Nobody but Me by Human Beinz.

Here are some awesome behind-the-scenes details in my Q&A with writer Danny Chun, along with a report from 1st AD Kelly Cantley. Thanks, Danny and Kelly!

Here is a mashup of The Office theme song and Lil Wayne’s Hustler Musik, created by Clockwork.

What do you think? Brilliant? Horrifying? 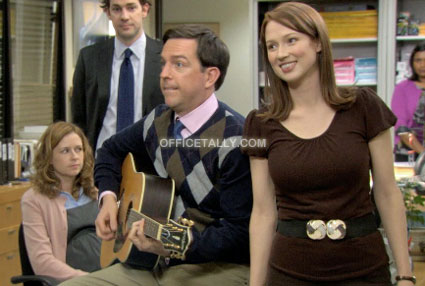 In The Office Season 6 episode Sabre, Andy (Ed Helms) and Erin (Ellie Kemper) sing a welcome song to Gabe (Zach Woods), to the tune of “Party in the USA” by Miley Cyrus.

Here is extended version of the song lyrics, as provided by Jennifer Celotta in the Sabre Q&A.

END_OF_DOCUMENT_TOKEN_TO_BE_REPLACED 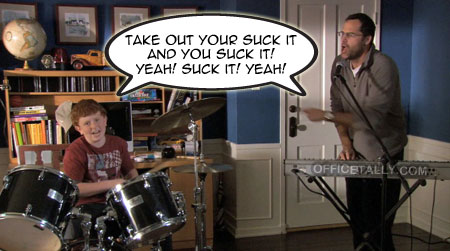 Well it’s a mess, what a mess
What you gonna do?
You’re gonna take out your Suck It and you suck it!

All this time, I thought The Scrantones, who perform The Office theme song, were a real band from Scranton.

I mean, they played at The Office Convention in Scranton.

They even have a MySpace band page at myspace.com/thescrantones! (no longer available)

So you can imagine my surprise when I got to chat with Bob Thiele (“Joey Scrantone”), who provided this never before heard story about how The Scrantones were born.

They even recorded an awesome long version of the theme song. Crank up the volume and rock out!

Bob Thiele composes, supervises, and produces the music for FX’s Sons of Anarchy. He was nominated this year for an Emmy in the “Outstanding Original Main Title Theme Music” category for SOA. From The Office to Sons of Anarchy — pretty cool, right?

A little postscript — besides The Office theme song, The Scrantones also recorded:

I’ve listened to some of the recordings, and they are precious. They aren’t available to the public, but if you guys request it loud enough, perhaps something can be worked out …