The Onion is reporting that CBS will be airing its own version of The Office — an idea which I believe is sadly misguided.

“You can’t just take a show that good, throw in a new set of actors, and expect the same results,” said Jennie Tan, who runs a popular fansite for the NBC show. “CBS just has to accept that there will simply never be another character like Michael Scott, ever.”

Source: CBS To Release Own Version Of NBC’s The Office

Full article: click the graphic below to see the full-sized version 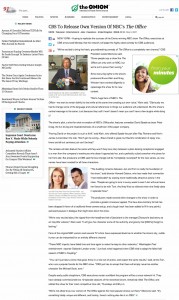