As part of the series Tales of the Early Internet, I was delighted to be interviewed by Mashable about OfficeTally’s impact on the Office.

As I told Mashable’s Nicole Gallucci, it was a perfect storm of events that happened back in 2007–I stumbled upon The Office while channel surfing in Season 2, I became so obsessed with the show that I created my first blog about it, and I started communicating with cast members on MySpace.

END_OF_DOCUMENT_TOKEN_TO_BE_REPLACED

From an email I got yesterday:

Fifteen years ago, the American television landscape changed forever with the launch of one of television’s most beloved and enduring series – The Office.

In recognition of this milestone, Spotify teams up with Ben Silverman’s Propagate and actor Brian Baumgartner (Kevin Malone) to present a new podcast, “An Oral History of The Office.”

END_OF_DOCUMENT_TOKEN_TO_BE_REPLACED

Get the tissue box out.

In John Krasinski’s latest edition of SGN (Some Good News), he reports a story of a Maryland couple who got engaged à la Jim and Pam, in front of a gas station mini mart.

Oh, but it gets better.

END_OF_DOCUMENT_TOKEN_TO_BE_REPLACED

If you’re a super fan of the show, then The Office: The Untold Story of the Greatest Sitcom of the 2000s: An Oral History (Amazon.com, hardcover $16.80, Kindle $13.99) is the perfect book to shelter in place with.

Do you guys remember that awesome, in-depth article about the classic Office episode, Dinner Party? It was published a few years ago in Rolling Stone.

Well, author Andy Greene is now back with an in-depth accounting of the entire show’s history, complete with never-before seen photos and never-before known details, straight from The Office cast, staff, and crew.

END_OF_DOCUMENT_TOKEN_TO_BE_REPLACED

It is ridiculously impossible to believe that exactly 15 years ago, The Office debuted on NBC with its first episode, Pilot.

The show remains, in my heart and the hearts of still-obsessed fans everywhere, one of the most beloved and cherished shows on TV.

END_OF_DOCUMENT_TOKEN_TO_BE_REPLACED

During his Saturday Night Live monologue last night, guest host Steve Carell was interrupted by his ‘The Office’ castmates Ellie Kemper, Jenna Fischer, and Ed Helms, asking for a re-boot of the show!

END_OF_DOCUMENT_TOKEN_TO_BE_REPLACED 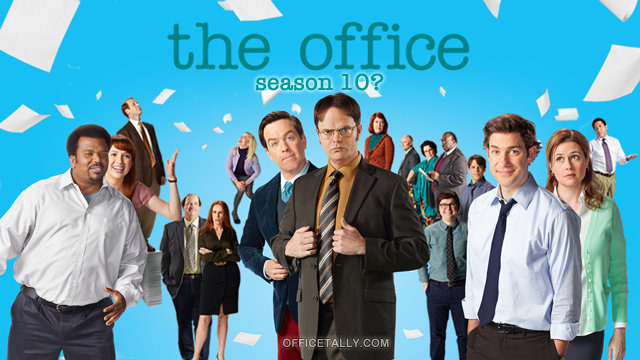