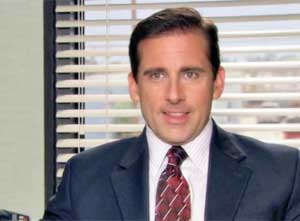 This promo of The Office aired during the Beijing Olympics, 2008.

Michael explains why he enjoys watching volleyball, and it’s not what you think. Or maybe it is. 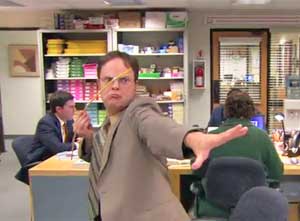 The information page says “Free admission for LUC students, faculty, and staff,” but does not specifically mention whether the event is open to the public.

Tipster Kiki says “I don’t think IDs will be checked at the door, so maybe Tallyheads can try to stop by to see if they will be allowed admission to BJ’s show.” Take a risk?

This posts lists items about the film ‘The Rocker’ starring Rainn Wilson.
It released on Wednesday, August 20, 2008.

The latest articles about Rainn Wilson in ‘The Rocker,’ plus a game.

This is a Wordle of OfficeTally’s July Archive page.

Oh man, this will be the biggest time-sucking distraction for y’all since … our sign contest. :)

Do you want to give it a try? Contest details after the jump.

END_OF_DOCUMENT_TOKEN_TO_BE_REPLACED

Here are the ten Real Life Michael Scott’ Contest finalists! Please pick your favorite in the poll below by Wednesday, Aug. 20 — the top vote-getter will receive ‘The Office’ Season 4 DVD, courtesy of Universal Studios Home Entertainment!

These stories prove that real life is sometimes more inappropriate than fiction.

UPDATE: the votes have been totaled, and the winner of ‘The Office’ Season 4 DVD is Andrea — congratulations!

Thanks to all who participated and voted!

END_OF_DOCUMENT_TOKEN_TO_BE_REPLACED

Every summer since before I was even a young Schrute, my family has dug out an area in the Northwest fields to use as a swimming hole. We fill it with water and a variety of unmarketable beets (to use as flotation devices) and then all of the Schrute children are allowed to visit the pool once a week. Swimming in Schrute Hole is purely for instructional purposes. Since the loss of poor Great Cousin Cordula to a horrific drowning accident in Lake Wallenpaupack back in the early Sixties, it is a family requirement that all Schrute children learn how to swim. Unfortunately for me, I hate swimming.

My swimming lessons were simultaneously extensive and short-lived. I was eight years old, which is the age all Schrutes begin their aqua-training. From the very moment I was thrown into the center of the swimming hole, I knew that I was not meant to be a swimmer. As with all things for Schrute children, however, I had no choice in the matter. My father took on the role of swim instructor and began teaching me. I hated every second of it except for the fact that it was the first occasion I had ever spent time alone with Father.

After the first day, I had to hide in the barn because I didn’t want anyone to see me crying. Crying leads to shunning and at that point, I had already had all the shunning a young boy needs. The process of swim instruction usually takes three full months of weekly three-hour sessions at Schrute Hole. During my second lesson, I was having such a miserable time that I decided to defy my father. Instead of treading water, I sank to the bottom of the swimming hole and dug my heels into the mud. Faced with the choice of letting his strongest son drown or teaching me a lesson for defying him, Father made an incredibly wise decision. He allowed me to stay down there long enough to pass out, but then jumped in and brought me back to consciousness once back on dry ground. When the shock of almost dying wore off, I offered my father a compromise. I would complete the entire Schrute Swimming Course if he could condense it into a week’s worth of lessons. Much to my surprise, he agreed. For the next week, before and after the farm work was completed, I took the full battery of swimming lessons. At the end of the week, not only was I a proficient swimmer, I was an incredible swimmer. And I hated every second of it.

Ever since then, I have not stepped foot in a swimming area of any sort – be it pool, hole, or anything else. Yes, I was accidentally driven into a lake once, but that was not my choice. Being a hero that day was also not my choice, but I accept it for what it is.

I don’t know exactly what it is about swimming that I dislike so much. I believe it has something to do with the fact that I was often left in the bathtub in my youth and forgotten about. The terrible memories of my skin wrinkling until it could wrinkle no more are enough to make me avoid any large collection of water. Other than that, I think there are more issues at play. For most of my life, family members have told me that I quite resemble Great Cousin Cordula, especially in the mouth area. Her lips were apparently very admirable. Sometimes, Grandmutter would say that she can sense a little bit of Cordula in me and I think I’ve always been afraid that she was right. If Cordula’s spirit is in me, I have subconsciously believed that I could befall the same fate as her. This is all a stupid psycho-babble way of saying that I don’t swim because I don’t want to die.
So now, the only time I spend at Schrute Hole is when Mose wants to go swimming. I dutifully stand by as his lifeguard, because, in truth, Mose is my favorite companion at home and I would hate to see him die a terrible soggy death. It is the image of Mose drowning in that murky water that makes me such a vigilant, amazing lifeguard.

Today you have seen into the darkest places of my heart. Don’t think that this will become a regular occurrence.

Yours in Text,
Dwight K. Schrute

TallyHead Hayley, who was doing her part to help Free Jenna last night, received one of the best accidental ransom rewards to be had … watching ‘The Rocker’ with the cast and crew of The Office last night in Los Angeles!

Hayley reports that she was running a little bit late, and when she got to the movie theater at Universal Studios Citywalk, the movie had just started. The theater was about half-full, and when the lights came up at the end, she realized that most of the people seemed to know each other.

Then she realized that in the middle of the group were none other than Steve Carell, Rainn Wilson, and John Krasinski! Oscar Nuñez, Kate Flannery, Brian Baumgartner, Melora Hardin, Creed Bratton, and Amy Ryan were also in attendance, along with Greg Daniels and about twenty crew members!

Man, what a lucky girl.

Hayley mentions that the cast signed autographs and took photos with fans after the movie. Were any of you there as well?! Please tell!