Coming off the heels of the instantly popular Ryan Started The Fire, here’s another music-oriented fan video with some seriously inspired editing:

I found a pile of 2009 calendars under the bed that I’d like to give away.

END_OF_DOCUMENT_TOKEN_TO_BE_REPLACED

[During our online chat with Mindy Kaling this past Tuesday, she mentioned an interview with Mike Schur that she read here on OfficeTally. That got me feeling a little nostalgic, so given that we have no new Office to look forward to today, I’m re-posting it here. I’m pretty sure this interview started my undying crush on ‘The Office’ writers. Originally posted July 2007, right before Season 4.]

Michael Schur is one of the veteran writers and co-producers of The Office. He’s written or co-written classic episodes from all three seasons, including The Alliance, Office Olympics, Christmas Party, Valentine’s Day, Branch Closing, Traveling Salesmen, The Return, The Negotiation, and The Job. He also played Dwight’s cousin Mose in the episode ‘Initiation.’

I recently had a series of conversations with Michael about Season 4 scripts, the writing process in general, how he really feels about his fellow writers, and other behind-the-scenes stuff. Enjoy! (I certainly did.)

END_OF_DOCUMENT_TOKEN_TO_BE_REPLACED

We were super happy to welcome Mindy Kaling to the OfficeTally Chat Room tonight!

Mindy graciously answered fan questions for a full hour — on everything from the letter Pam reads to Michael in ‘Lecture Circuit,’ to her favorite Oscar night fashion, to who’s hottest in the writers’ room. And of course it wouldn’t be an OfficeTally chat without a few spoilers thrown in!

Thanks, Mindy, for an awesome evening!

Here is the full transcript. END_OF_DOCUMENT_TOKEN_TO_BE_REPLACED

From Tallyhead Steph: “Kate Flannery made a very awesome guest appearance at UCLA this past weekend. It was our annual Dance Marathon … in which students fundraise and commit to staying on their feet for 26 straight hours to raise money to help fight pediatric AIDS! It was so great of her to show her support! Here’s the video I took of her speech!”

A couple of appearances by ‘The Office’ cast this weekend:

As always, if you guys are able to attend, please come back and post a report!

[And while we’re on the subject, did you know you can find a whole calendar of Office-related events? — just click the ‘calendar’ link in the upper right corner of this page. If you use Google Calendar, iCal, or another supported calendar, you can even subscribe so that these events automatically appear in your calendar!] 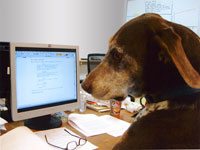 For everyone asking about the ‘Stress Relief’ Q&A, we’re all looking forward to hearing Paul’s tidbits soon!

(This is Paul Lieberstein’s dog, Dude, posted with permission by Dunder Mifflin Infinity. Cute, no?)