If Andy’s girlfriend looks familiar, you may have seen the actress, Eleanor Siegler, in the Subaru “lost sunglasses” commercial:

Holiday cheer is in short supply when Michael insists on doing a last-minute swap of Secret Santa gifts, and Jim becomes alarmed that his sweet and sentimental gift for Pam will end up in Dwight’s hands.

Michael gets his heart broken for the holidays by girlfriend Carol. Andy takes Michael out drinking, with Dwight and Jim, while tensions on the party planning committee between Angela, Pam and Karen cause rival parties to form.

Phyllis’ Moroccan-themed holiday party goes up in flames when Meredith’s hair catches on fire and Michael is forced to deal with the accident. Meanwhile, Dwight corners the market on the hottest toy of the Christmas season.

Michael is outraged when Jim allows Phyllis to be Santa at the office Christmas party. Jim and Dwight try to get everyone into the holiday spirit despite the uncertainty with Dunder Mifflin. Meanwhile, Oscar has a secret crush.

Holly Flax covers for Toby when he takes a leave of absence. Pam is forced to do a second Christmas party after Michael wants the party to be on the day Holly returns to Scranton. Jim regrets agreeing to a snowball fight with Dwight.

Andy tries to make this year’s Christmas the best ever by granting each person’s holiday wishes. Meanwhile, Robert California tries to drown his sorrows at the office party.

When the party planning committee drops the ball on the annual Christmas party, Dwight gets everyone to celebrate with a traditional Schrute German Christmas. Darryl fears Jim has forgotten his promise to take him along to the new job in Philadelphia. Meanwhile, Pete teaches Erin about his favorite movie Die Hard.

NBC.com posted photos of The Office character Gabe Lewis as Abraham Lincoln, inspired by the Season 8 episode, Gettysburg. Not a bad resemblance! 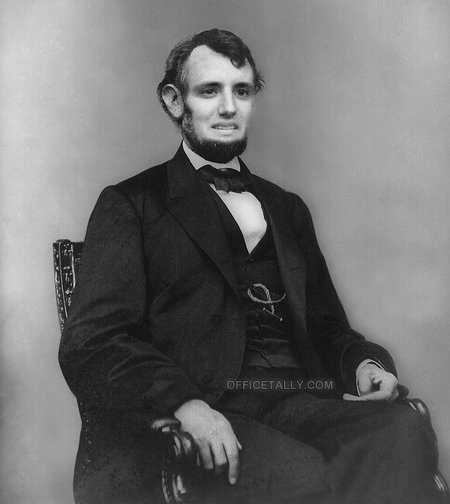 That crazy drummer from The Office episode, Pam’s Replacement, was played by Steve Moore.

From Steve’s website: On June 1, 2010 a random fan uploaded a performance of Steve Moore on YOUTUBE entitled, “This drummer is at the wrong gig.” The video immediately went viral receiving over 5 million hits in less than a month.

Here’s Steve’s performance, via “Rick K and The Allnighters”:

Hey Dexter fans, did you notice the Sabre printer that appeared in last night’s episode, ‘The Angel of Death’? 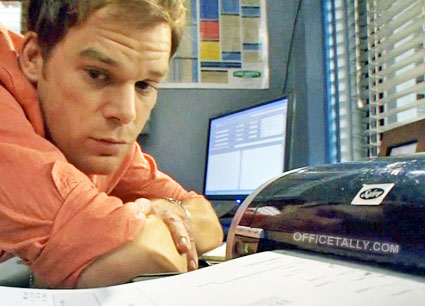 Introduced in The Office Season 8 episode, The Incentive, the Pyramid is a triangular-shaped tablet computing device produced by Sabre.

Dwight Schrute showed off The Pyramid during a team meeting: END_OF_DOCUMENT_TOKEN_TO_BE_REPLACED

When Darryl is told that he will need to supply a resume as part of his application for branch manager, he calls customer support: “Yes, there used to be a paper clip that would pop up and say, ‘Looks like you are writing a letter or resume. Would you like help?’ I believe his name was… Clippy.’

For those of you too young to remember, Clippy was a real (albeit annoying) onscreen assistant introduced in Microsoft products in the late 1990s. Dunder Mifflin needs to update its software!