Here’s a sampling of stuff posted on Jenna Fischer this week:

And here’s some stuff posted earlier, just to keep everything about Jenna this week in one place:

Wow. Entertainment Weekly has placed OfficeTally at #7 in its ‘Essential Fansites’ list! I eez … floored. Thank you, EW!

And thank you, mighty legion of Tallyheads, for all the fantastic contributions you make to OT, from news tips, to fanvids, to participating in our wacky contests. OT would not be as rich without you!

(For EW readers coming here for the first time, here is the Pam Pong song.) 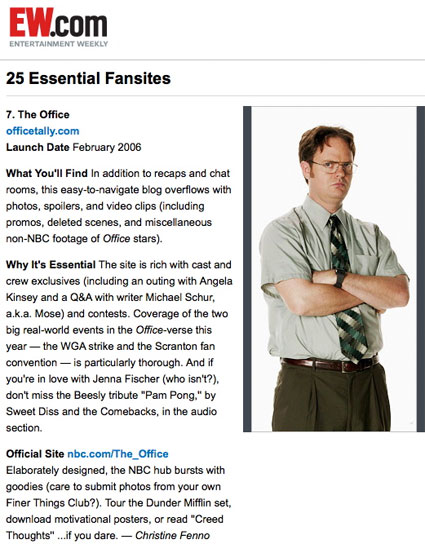 Many thanks to The Office writers Lee Eisenberg and Gene Stupnitsky for visiting the OfficeTally Chat Room tonight!

Oh sure, there were some disparaging remarks made about our last OTCR guests, and the conversation turned raunchy around minute 33, but what’s an OfficeTally Chat without a little insanity?

Full transcript available after the jump. Thank you, Lee and Gene! We miss you guys and we miss the show!

P.S. In the following transcript, “leeeisenberg” refers to both Lee and Gene. They are one.

END_OF_DOCUMENT_TOKEN_TO_BE_REPLACED

Tallyheads voted for their favorites, and here are your five OfficeTally Lolcat Contest prizewinners: 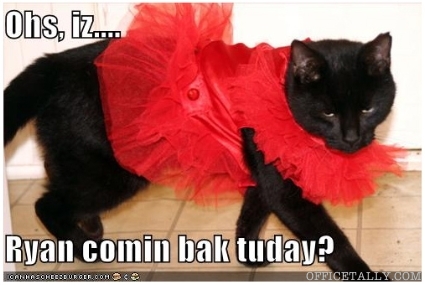 END_OF_DOCUMENT_TOKEN_TO_BE_REPLACED

Congratulations, Office staff! There is no greater comedy ensemble in TV today.

The Office’s Jason Kessler made this little video to help out a friend with a contest.

He’ll probably hate that I say this, but I think it’s adorable.

“Featured cast members from ‘The Office’ perform an evening of stand-up to benefit The Actors Fund.”

Tallyheads, please report back if you attended!