Here is her report! (Thanks, Emily!)

END_OF_DOCUMENT_TOKEN_TO_BE_REPLACED 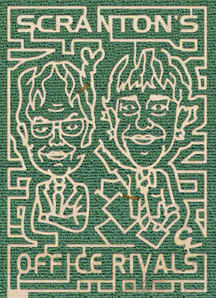 Is this totally cool or what?

You can visit a Dwight and Jim corn maze at Miller’s Orchards Farm Market in Clarks Summit, Pennsylvania!

From their site: “Come take the challenge of finding your way through the twists and turns of one or both of our ‘Office Rivals’ corn mazes that we have carved into 7 acres of corn.”

I just got back from Craig Robinson’s show at Central Michigan University. His performance capped off our 56-8 win on Homecoming so the audience was a little rowdy, but I had a great time. I got there early and had a front row seat for the show.

Except the Q&A, the entire show was him singing and playing his keyboard. He sang us a lot of fun songs and made us sing with him.

The guys sang a song to the girls about how much they respect and admire them, while the girls sang about how we are princesses and divas! We sang “Summer Loving” from Grease and then he gave the girls a solo on “I Will Survive.”

Craig yelled at us for not participating, then started “Sweet Dreams” by the Eurythmics, saying “I know how to get everyone singing, especially white people!”

I asked him what his favorite episode to shoot so far was. He started laughing and talked about the Christmas episode that they shot last week. He didn’t say much except that when Michael came down the stairs singing it was impossible to hold it together.

He sang us the jingle from Local Ad, then someone asked him about Creed in real life. Craig said he is real cool, but he always has some Creed stuff up his sleeve.

Someone asked him to play the Office theme and someone else asked for a hug. He even sang Happy Birthday to someone in the audience.

He talked about his movies and upcoming projects. He said that he was coming out with a CD soon with his band the Nasty Delicious.

The show was about an hour long with a ton of audience participation! It was R-rated, but still a great time.

This was such a great experience, I highly recommend it.

“I was on vacation in Chicago, and there is this red truck roaming around the streets of downtown Chicago, the back of which contains a life-sized diorama of ‘The Office,’ with mannequins of Pam, Jim, Dwight, and Michael. The truck has the show’s logo on it and the times for the show’s syndication run on a local station. The truck also plays a sound loop with a clip of the theme song, Michael talking, and a voice-over promoting the show.

It would all be really cool, if the mannequins they used weren’t the worst-possible likenesses of the actors (which they are — Pam is blonde!!), and the set looked anything like something from the show (which it doesn’t). It’s weird and disturbing but somehow also awesome.”

Fan photo of the day:

“Hey there, it’s Tallyhead Spiderface. I have had to order three Ryan Bobbleheads from NBC before I got one without a broken neck.

NBC was very nice, and kept sending more, but I’m really starting to think that Kelly Kapoor had something to do with this.”

A Tallyhead who wishes to remain anonymous wrote in to say: “It was recently my birthday, so I absofruitly had to have an Office birthday cake! I think rice paper was used for the picture with some sort of edible ink. This came along with a shiny new copy of The Office: Season Five on DVD, but sadly, no Golden Ticket. I thought it was awesome and wanted to share this with y’all other Office fans.” END_OF_DOCUMENT_TOKEN_TO_BE_REPLACED

From Tallyhead Ryan: “Thought you might enjoy this clip I captured of a high school valedictorian making a ‘that’s what she said’ joke in her speech at graduation … and the whole class was in on it.”