Brian Baumgartner dropped by Attack of the Show right before Thanksgiving and brought along a clip from The Office’s upcoming holiday episode, ‘Secret Santa’: 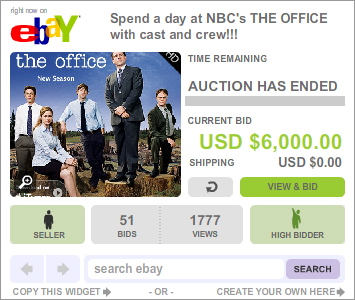 Bid on a set visit to The Office!

Check out Jenna Fischer’s MySpace blog, which includes more details on what a set visit is like. Doesn’t it sound fun? :)

“Kim Kardashian, Donald Trump, Tom Arnold, Nick Lachey, Alan and Robin Thicke, Brian Baumgartner, and Charles Barkley are a few of the celebrities confirmed to play at the Reunion Resort in Orlando, Florida on November 11th through the 15th.

One of the best parts of running OfficeTally is reporting on The Office cast’s various movie projects. It’s been a busy summer — John Krasinski in Away We Go, Ed Helms and The Hangover, and B.J. Novak in Inglourious Basterds.

Into Temptation is a story about a young priest who tries to prevent a prostitute from committing suicide. Its cast includes Jeremy Sisto (“Law and Order”), Kristin Chenoweth (“Wicked,” “Pushing Daisies”), and The Office’s Brian Baumgartner.

Needless to say, this is a radical departure from playing Kevin Malone, and after watching the trailer and listening to the Minnesota Public Radio interview, I had to go directly to Brian Baumgartner himself and ask him a few questions about the movie.

The film had its world premiere in Minneapolis on Thursday, plays in limited release around the country after that, and then comes out on DVD in October.

The Office’s Brian Baumgartner, Kate Flannery, and David Denman played this weekend in the Hollywood Stars game at Dodger Stadium. A few photos on the next page.

Were any of you guys there? Sounded like a fun game. :)

The Office’s Brian Baumgartner has been at Lake Tahoe this week participating in the American Century Celebrity Golf Championship.

The final round is airing right now on NBC — maybe we can spot Brian!

Here are various tidbits about his week. END_OF_DOCUMENT_TOKEN_TO_BE_REPLACED

It was awesome to chat with The Office’s Brian Baumgartner this afternoon in the OfficeTally Chat Room.

Brian discussed what it was like working with Stephen Merchant and Amy Ryan, why he is ‘King of the Internet,’ and what food he’ll never be able to eat again, because of The Office. Thank you, Brian, for keeping the LOLs coming at a steady pace!

A full transcript follows after the jump, perhaps with a few spoilerish morsels … END_OF_DOCUMENT_TOKEN_TO_BE_REPLACED

Tidbits about ‘The Office’ show, cast, and staff for the week ending October 26.

Pages: 1 2 3
Welcome to OfficeTally, the top fansite for NBC's hit comedy, 'The Office.'