Here is the The Office’s Mindy Kaling on her fourth visit to The Late Late Show with Craig Ferguson tonight. 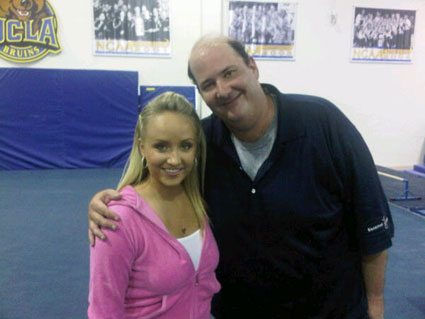 American gymnast and 2008 Olympic gold medalist Nastia Liukin just posted this photo of her with The Office’s Brian Baumgartner on her Twitter page.

Nastia is shooting a show with Brian. More details to come!

In celebration of iPhone 4 release day, I cropped this year’s cast photos of The Office to match the bigger 640×960 iPhone 4 screen. Enjoy!

P.S. You can find OfficeTally’s entire collection of wallpapers here.

END_OF_DOCUMENT_TOKEN_TO_BE_REPLACED

(June 24, 2010 — New York, NY) Ellie Kemper, who stars as receptionist Erin Hannon on NBC’s critically acclaimed comedy series The Office, and Carrie Kemper, a writer on the Emmy award-winning show, have reached agreement with Three Rivers Press, an imprint of the Crown Publishing Group at Random House, Inc., to co-author a debut comedic novel scheduled to be published in spring 2012.

Tentatively titled Monday Sessions, the Kemper sisters’ book takes the form of a collection of misplaced diary entries and patient progress notes belonging to Dr. Amy Rice, a single, thirty-something New York City therapist who becomes humorously and inappropriately involved with the lives of her clients. Through Amy’s increasingly unprofessional notebook entries, readers learn the stories of each of her patients and her own idiosyncratic narrative starts to emerge.

Said Ellie Kemper, “We are hoping that this is only the first in a series of Kemper-family manuscripts. We know that our two brothers are eager to get their own book, Ellie and Carrie: The Worst People In Our Family, off the ground as well.”

Carrie and Ellie Kemper are sisters from St. Louis. In addition to playing Erin on The Office, Ellie is also a contributing writer for The Onion, The Huffington Post, and McSweeney’s Internet Tendency. Carrie was the head writer and editor-in-chief of Stanford University’s humor magazine, The Stanford Chaparral, and currently writes for The Office. Both Carrie and Ellie live in Los Angeles.

Various news tidbits related to The Office and its staff:

Previously posted tidbits on the next page.

On January 12, Haiti was devastated by a magnitude 7.0 earthquake. The Office’s Rainn Wilson is auctioning off some cool Office stuff to raise money for Haiti relief organization Planting Peace.

STATUS: Rainn’s auctions raised over $10,000 for Planting Peace. Thanks to all buyers who contributed so generously! (Here are the items that were sold.)

Sources confirm to me exclusively that the NBC hitcom has just promoted Zach Woods — a.k.a. Sabre VIP (Very Insecure Person) Gabe — to series regular for season 7.