On January 12, Haiti was devastated by a magnitude 7.0 earthquake. The Office’s Rainn Wilson is auctioning off some cool Office stuff to raise money for Haiti relief:

“Dear Tallyheads,
I wanted to do some Haiti fundraising with tanster and so I’ve hauled out some invaluably precious Office items to auction. This will benefit the amazing charity I work with called Planting Peace. They will be working hard on providing aid after the earthquake. Thanks for your support of ‘The Office’ and for your generosity to the suffering people of Haiti.”

1. The Creed ‘Enigma’ t-shirt
Rainn: “These t-shirts were made by the sound department in the second season to welcome Creed Bratton as a series regular. It was like Creed had his own cult with everyone wearing those Creed shirts around.” 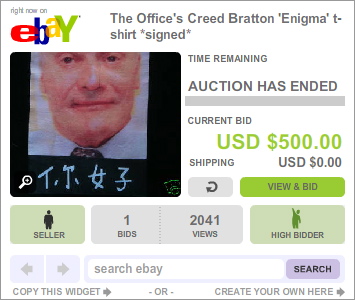 2. Dunder Muffin suitcase
This American Tourister rolling red suitcase was the Season 3 crew gift presented by John Krasinski, Jenna Fischer, and Rainn Wilson. It is embroidered with the infamous misspelling “DUNDER MUFFIN.” Will be signed by the whole cast! 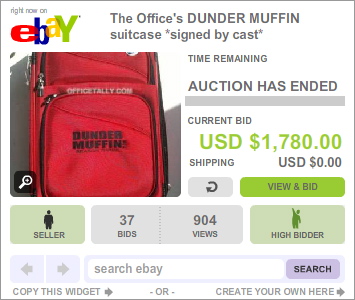 3. The Office “100th Episode” watch
This one of a kind authentic VICTORINOX Swiss Army timepiece, inscribed with “THE OFFICE 100,” was presented to Rainn by the series creators and NBC to commemorate the show’s first 100 episodes.

Rainn says: “This was a cast and crew gift given by the producers for a Season 5 wrap gift. I never wore mine, but put it aside. I don’t wear Swiss Army because I don’t believe in the Swiss Army. If it were an Israeli or North Korean army watch, I would have worn it in a heartbeat!” 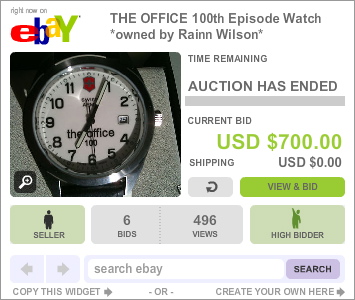 4. THE OFFICE Set Visit for 4!
What else is there to say? Visiting the set of The Office has got to be every fan’s dream!

Details: The winner of this auction item and three (3) guests will be given a tour of THE OFFICE set in Los Angeles and time in the VIP Green Room to watch scenes being filmed for an actual episode of The Office! 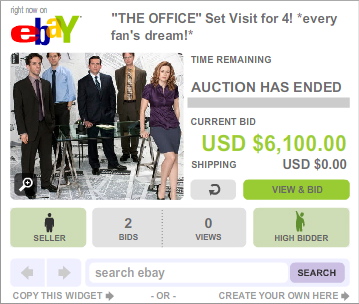 Rainn says: “This was a Season 5 gift from me, John Krasinski, Jenna Fischer, and Steve Carell to the crew. Monogrammed and it is awesome!”

tanster says: “I used a camera just like this one during my visit to THE OFFICE set last year for the filming of ‘Company Picnic.’ I can personally attest to the great video quality that it produces! Example: here is HD video that I shot with my Flip Mino HD. One of the coolest gadgets ever!” 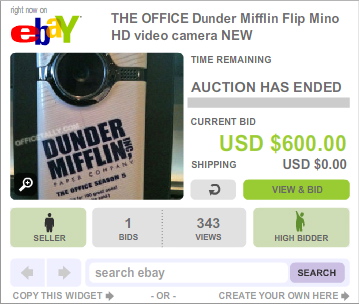 6. THE OFFICE Rainn Wilson Basketball Anime shirt
This “World Anime Expo Philadelphia 2002” t-shirt was created for the classic and much loved Season 1 episode of THE OFFICE, Basketball. It is a size XL. Be the envy of your beet-eating anime-loving friends. The shirt will be autographed by Rainn!

Rainn says: “This shirt should be going into the Smithsonian, instead it can be worn on your torso. Priceless and one-of-a-kind for any real Office fan.” 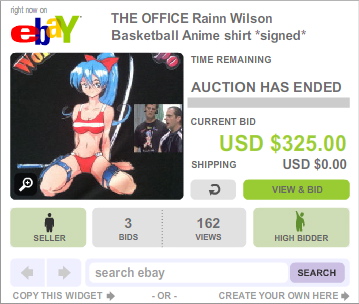 About the item: You may already know about the magical properties this shirt has on its own, as described on Wikipedia. But because this shirt was also worn by the man himself, Dwight Schrute, it is even more powerful and alluring! It is a size XL. The shirt will be autographed by Rainn! 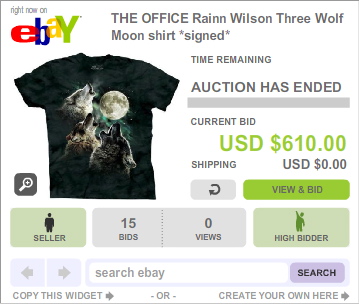 8. THE OFFICE Clue Game *signed by Rainn Wilson*
Dunder Mifflin employees must determine WHO “killed” Toby, with WHAT office weapon and WHERE the crime occurred. Can you solve this Scranton mystery before it’s too late? The classic game of whodunit gets a Dunder Mifflin makeover. A must-have collectible for any Office fan! The game will be autographed by Rainn Wilson (“Dwight Schrute”)! 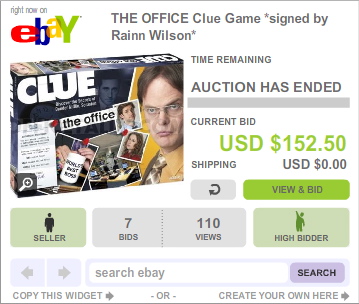 There are two embroidered areas: 1) on the chest, “Dunder Mifflin Paper Company, A Division of Sabre” and 2) on the sleeve, “the office season six.” The best part is that the cast of THE OFFICE autographed the inside of the jacket! 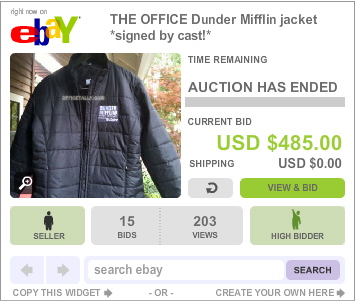