Update: The poll is now closed. Prizewinners will be announced on Tuesday …

Kent said, “This was tough!!!! We have a LOT of HUGELY talented fans.”

And here are the 20 finalists, in no particular order: END_OF_DOCUMENT_TOKEN_TO_BE_REPLACED

I’ve just been notified by a certain Central Time zoner that at least three new scenes are in tonight’s airing of ‘Women’s Appreciation.’

END_OF_DOCUMENT_TOKEN_TO_BE_REPLACED 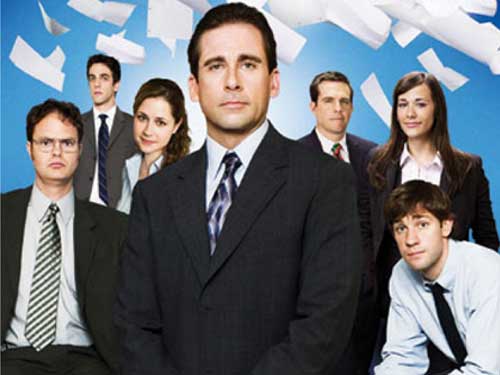 I was lucky enough to receive an advanced copy of The Office Season 3 DVD (thank you, NBC!). Over the past several days, I’ve watched every single new minute of it. Here are my notes and a few screenshots.

END_OF_DOCUMENT_TOKEN_TO_BE_REPLACED

Today I was at my local Best Buy and they had Season 3 out!!! I purchased the gift set for $49.99 that includes a mini-Dwight Schrute bobblehead, Dundie Award, Welcome Aboard Letter and of course Season 3 of The Office.

1. The Dundie looks pretty much like the one in the show. It is about the same size as the DVD itself and looks really authentic.

2. The letter is printed on Dundle Mifflin stationery and is the letter employees received after The Merger. It also contains 16 general rules of the office.

3. The mini bobblehead is pretty much the same as the one sold on NBC.com.

4. The box is the usual Dunder Mifflin paper box with a few fake stickers on them. One reads “Hello my name is Future Dwight (Level Orange).” Another is “Beets, Bears, Battlestar Galactica.” “Scranton or Bust” is another one.

5. Now to the DVD set. The inside front packaging is the same picture of the NBC.com website. It all looks like a cork board with various pictures and messages on it. All the DVDs look like graphing paper with a paper clip bent to form the numbers.

The Office’s Co-Executive Producer Kent Zbornak is sending me the list of the 20 finalists for the OfficeTally Talking Head Contest and I will post it later today, along with a poll so that you, the OfficeTally reader, can pick your favorite.

The top five vote-getters will each receive a cast-autographed copy of The Office Season 3 DVD!

Can you stand the anticipation?

Even though it has absolutely NO new footage, I still love it.